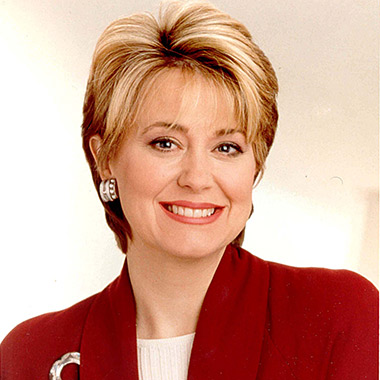 Jane Pauley is an American television anchor as well as a journalist. She is mainly known for working on NBC’s Today program and also co-host of Dateline NBC.

Jane Pauley was born on October 31,1950 in Indianapolis, Indiana, United States. Her birth name is Margaret Jane Pauley. She attended Warren Central High School in Indianapolis and graduated from there in 1968. While she was studying there she competed in debate and public speaking tournaments. She earned a scholarship to Indiana University. She was involved in the kappa Kappa Gamma sorority. She worked at WiSH-TV in Indianapolis from 1972 to 1975. She began her career with NBC joining WMAQ-TV in Chicago in 1975.

Pauley became the co-host of NBC’s Today in 1976 and ended her contract in 1989. She worked with Tom Brokaw from 1976-81 and with Bryant Gumbel from 1982-89. From 1980-82 she worked as the anchor of the NBC Nightly News. She became an inspiration for several women to be a female journalist. She wanted to work in prime-time television so in 1989 she announced her resignation from Today. She then started hosting Real Life with Jane Pauley. She also worked for NBC Nightly News as deputy anchor. Alongside Jay Leno and Candice Bergen, Pauley co-hosted the 42nd Primetime Emmy Awards in 1990.  She co-hosted NBC’s Dateline NBC from 1992 to 2003.

She then returned to television in 2004 as the host of The Jane Pauley Show. She discussed her bipolar disorder at length. After the cancellation of the show, Pauley appeared on television programs. She led a half-hour discussion on PBS’s Depression: Out of the Shadows. She also participated in the smart talk Lecture Series. She lent her name to the Jane Pauley Community Health Center in September 2009. It serves the local community. She then joined the Board of Directors of The Mind Trust in 2009. She is also associated with the McGovern Institute for Brain Research. She has also served for the Children’s health fund in New York City.

Pauley returned to TODAY in march 2009. She contributed on behalf of a series produced and sponsored by AARP. Her former Today co-host Bryant Gumbel and current weather anchor Al Roker reunited on December 30, 2013, and co-hosted a special reunion edition of Today.

In 2004 she announced her diagnosis of bipolar disorder. She also published her autobiography “Skywriting: A Life Out of the Blue” in the same year. She launched it on her daytime talk show. She got married to Garry Trudeau. Garry is a cartoonist as well as the author of Doonesbury. The couple together is blessed with three children. As of 2016, Jane Pauley’s net worth is $40 million dollars.