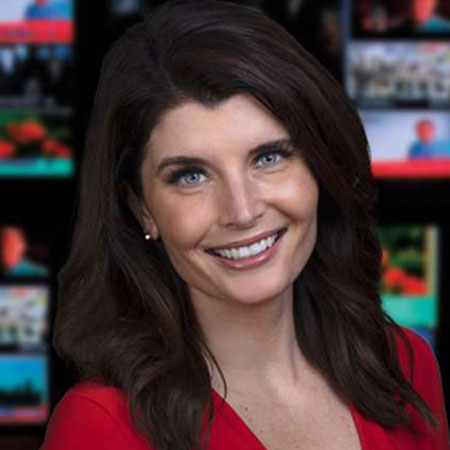 Vencill has collected a huge amount of money from her reporting career. Besides, she is living a happy life along with her boyfriend. If you want to know who is her boyfriend? Then keep scrolling and read the whole article.

Vencil holds American citizenship and belongs to white ethnicity. She attended Western Kentucky University where she studied and earned the bachelor’s degree in Broadcast Journalism in 2003.

Who Is Keke Vencill Boyfriend? Know about her Love Life

Keke Vencill is currently dating to her boyfriend CJ Stevens aka Yankee. The couple kept their relationship secret at the beginning but Keke later revealed it to the public on July 5, 2017, uploading a picture of CJ on her social media.

Keke Vencill posted a photo oh her boyfriend carrying her dog on her Instagram and captioned, ” My Boys”.

Vencill’s boyfriend CJ Stevens works as a Monitoring Sales Specialist at Medtronic since 2014. He is a BSc. in Marketing graduate from the John and Wales University and has also worked as Sales Associate/Territory Manager at ConMed Linvatec/Hall Surgical.

How much Net Worth and Salary does Keke Vencill have?

As we know, Keke Vencill is one of the popular news anchors in America, she has accumulated a decent amount of money from the broadcasting career. Moreover, she has worked for several TV stations which has helped her to increase her net worth.

Keke Vencill’s net worth as of 2019 is not disclosed yet. Looking at her successful career, her earnings can be assumed to be around $100 thousand. According to the PayScale, an estimated salary of the WHDH’s journalist paid ranges from $29,120 to $93,000 annually.

Besides working as a journalist, Vencill also served as a Publis Affairs Specialist for the U.S. Department of Labor in 2003. Moreover, she also writes her own stories.

Have you read: Richelle Carey Biography

After her graduation, Keke initially worked as the Public Affairs Specialist for U.S. Department of Labor until May 2004. After that, she went moved to Oak Hill in West Virginia and spent 5 years working as an anchor, producer, and reporter for WOAY News from May 2004 to July 2009.

In 2009, she joined WCSC-TV Live 5 News station where she worked for 4 years as an anchor and reporter. Similarly, she also worked for a correspondent for NH1 News Network in 2014. But later Vencill left the station after working for two or half years.

Currently, Keke Vencill is working for WHDH Channel 7 team as a reporter and news anchor. Moreover, she joined the station in May of 2017.