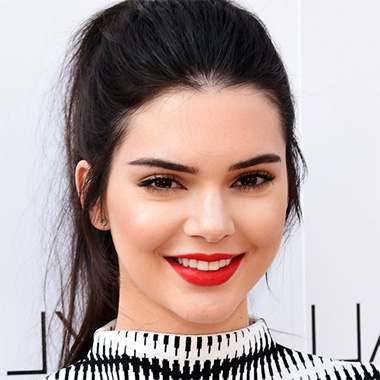 Kendall Nicole Jenner is an American television personality and a fashion model. She is originally famous for her appearance in the E! reality TV show Keeping Up with the Kardashians.

Kendall Jenner was born on November 3, 1995, in Los Angeles, California, U.S.  Her birth name is Kendall Nicole Jenner. She was born to Caitlyn Jenner and Kris Jenner. She has a younger sister named Kylie Jenner. From her father second marriage, she has Brother Burt Jenner, Brandon Jenner and Sam “Brody” Jenner and Sister Casey Jenner. From her mother, she has Kourtney, Kim, and Khloe as her maternal half-sister and Rob Kardashian as her half-brother. Before homeschooling, she studied at Sierra Canyon School and graduated in 2014.

When she was 14 years old, Kendall Jenner began model after signing with Wilhelmina Models on July 12, 2009. On April 19, 2010, she featured in a Teen Vogue. She was on a cover of a number of teen-oriented magazines which includes Looks, GoGirl, American Cheerleader, GenLux, Miss Vogue Australia, Raine, Flavour Magazine and Teen Prom. She also has modeled in swimwear campaign with Agua Bendita, Sands Australia, and Leah Madden. She featured on the cover of Harper’s Bazaar Arabia in April 2013. She then signed with The Society Management On November 21. At the New York City Met Ball and Cannes Film Festival, she made her socialite debut.

She then featured in Interview in June 2014. In August issue, she was on the cover of LOVE. She then walked in Paris for Chanel and Givenchy, in New York for Marc Jacobs, Diane Von Furstenberg, Donna Karan and Tommy Hilfiger and in Milan for Dolce & Gabbana, Ports 1961, Pucci, Fendi and Bottega Veneta during the month of September 2014. On November 15, 2014, she announced that she became the new global face of Estee Lauder. For the company, she featured in Modern Muse Le Rouge fragrance and Little Black Primer mascara campaigns. She became number one model who is being followed on Facebook and Instagram. She ranked 2nd on Twitter behind Tyra Banks. In December 2014 she also became the second model to be Googled. She featured on the cover of Marie Claire in January 2015.

Kendall was also featured in a Karl Lagerfeld campaign. She became the new face of Calvin Klein Jeans signing contract in March 2015. She appeared on the cover of Harper’s Bazaar and GQ in April 2015. She is also featured in a Karl Lagerfeld eyewear campaign. She also appeared on the July cover of Vogue China with actor Kris Wu.

She has co-hosted public events with Kylie. They together hosted Glee: The 3D Concert Movie on 6 August 2011. They hosted the premiere of The Vow on February 6, 2012. They together interviewed The hunger Games cast on March 12, 2012. She also presented at 2014 Billboard Music Awards. The sisters together co-hosted Much Music Video Awards on June 15, 2014.

Kendall Jenner began dating the boy band One Direction’s singer harry Style in November 2013. It was announced that they broke up in February 2014. She bought a $1.4 million worth residence in May 2014. As of 2016, Kendall Jenner’s net worth is $12 million dollars.