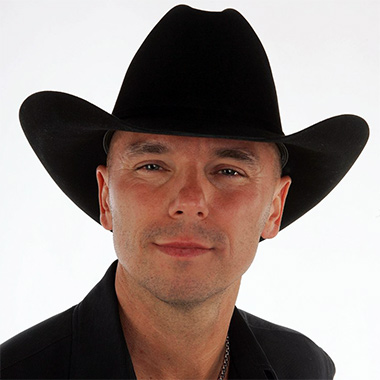 Kenny Chesney is an American award-winning country music singer as well as songwriter. He is also the producer and co-director of the film The Boys of Fall.

In 1993 he signed a contract with Capricorn Records. In April 1994, he released his first album “In My Wildest Dreams”. The album’s lead single are “The Tin Man” and “Whatever It Takes”. The album sold 10000 copies. He then signed with BNA Records. In 1995 he released his second album “All I Need to Know”. His single “Fall in Love” reached at the Top 10 and his another single “Grandpa Told Me So” reached at NO. 23. In the same year, he wrote Confederate railroad’s album “When and Where” single “When He was My Age”. In 1996 he released his another album “Me and You”. The lead single from the album is “Back In My Arms Again”. His another single “When I Close My eyes” reached No. 2 on the Billboard country charts.

In 1999, he released his fifth album “Everywhere We Go”. His singles “How Forever Feel” and “You had Me from Hello” became No. 1. His “She Thinks My Tractor’s Sexy”and “What I Need to Do” reached No. 11 and No. 8 on the country charts respectively. His album became first platinum selling album. In 2000, he released his Greatest Hits compilation album. In 2002, he released his album “No Shoes, No Shirt, No Problems”. The album lead single “Young” reached No. 2. His another single “The Good Stuff” became Billboard’s No. 1 country song. In the same year, he was honored with the Video of the Year and Male Video of the Year for video of single “Young”. He also became Top Male Vocalist of the Year in 2003. He released “All I Want for Christmas Is a Real Good Tan” in 2003. He released his album “When the Sun Goes Down” in 2004. The lead single from the album “There Goes My Life” reached the top of the Billboard country charts. He released the album “Be as You Are” in January 2005. He released his another album “The Road and the radio” with five singles.

Kenny was born on March 26, 1968, in Knoxville, Tennessee, U.S. His birth name is Kenneth Arnold Chesney. His father name is David Chesney and his mother name is Karen Chandler. He has a younger sister Jennifer Chandler.

He attended the Gibbs High School and graduated from there in 1986. While he was in his high school, he played football and baseball. He got his first guitar in Christmas. He also attended East Tennessee State University and studied advertising there. He graduated from there in 1990. He recorded a demo album at the Classic Recording Studio in 1989. After his graduation from East Tennessee, he performed at several local clubs in Nashville.

He is married to actress Renee Zellweger in a small wedding ceremony on May 9, 2005. As of 2016, Kenny Chesney’s net worth is $135 million dollars.