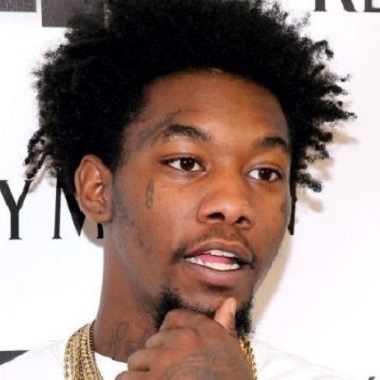 Kiari Cephus, best known as Offset is an American rapper and one of the members of the hip-hop trio Migos. Kiari came to the spotlight as their group Migos reached high success in 2013 with the release of the viral hit single ‘Versace’ which reached the number 99 on the Billboard Hot 100.

Offset is married to an American rapper Cardi B in September 2017. The couple started dating in 2017. Offset purposed Cardi B on 27th October 2017 at a live performance at Power 99’s Powerhouse in Philadelphia, Pennsylvania.

Kiari Cephus is an American Nationality, born on 14th December 1991, in Lawrenceville, Georgia, US. He belongs to black ethnicity. The two members of the trio Quavo and Takeoff are his direct relatives also raised together; Kiari being Quavo’s cousin and uncle of Takeoff. Information about Offset’s parents and family background has not yet been detailed in his bio, so far.

Kiari has always stayed away from affairs and relationships in public. However, she has gone through some problems with the law enforcement agencies. Critics say that if the members of Migos could handle the fame and money in the proper way, this group can become the next huge thing in the hip-hop world.

Kiari Cephus started his career forming the Hip-hop trio Migos with the two other members of the group, Quavious Keyate Marshall and Kirshnik Khari Ball in 2009. The group was named Popo Club at first which did not crack smoothly.

Later in 2010, the trio was renamed as Migos. Kiari Cephus’ career took an upward turn when Migos released their first mixed tape in 2012. In 2013, the group released ‘Versace’ that made to number 99 on the Billboard Hot 100 chart of US and mixtape ‘Y.R.N’ and got the status of the 27th best album that year.

The release of ‘No Label 2’ and ‘One time’ in the following year gained all-time high popularity of the trio as well as Kiari making its all-time high. Kiari Cephus career boosted when Migos announced the release of a full-fledged album and signed a deal with 300 Entertainment.

In July 2015, Migos first album came out which made to Top Rap Album chart which hit number 3 on the list. The Trio released the second studio album recently in January 2017 was debuted No. 1 on the US Billboard 200.

Kiari Chephus’s first controversy was when the trio along with the 12 other coworkers of Migos was arrested for taking marijuana and firearms in April 2015. This led to the postponement of Migo’s Tung Rich Nation Tour. Offset received severe additional charges for attacking a convict in custody in 2015.

Kiari was finally released in December 2015 after accepting Overture deal and had to pay an enormous amount of money as fine. In 2016, he was also booked for driving without a proper license and is currently serving five years of probation as well as banishment from four countries.

Offset is married to an American rapper Cardi B in September 2017. The couple started dating in 2017. Offset purposed Cardi B on 27th October 2017 at a live performance at Power 99’s Powerhouse in Philadelphia, Pennsylvania.

The duo welcomed their first child Kulture Kiari Cephus on 10th July 2018. Offset also has three children, two sons, and a daughter, from his previous marriage. They are named Jordan, Kody, and Kalea.

Moreover, Offset also receives a good sum of money from several fashion lines and brands as an endorsement. Migos repeatedly is posting about their tour and shows and still are prevalent in the hip-hop arena. Allocating information from several sources as of 2018 it is found out that Offset has a current estimated net worth of $4.2 million.