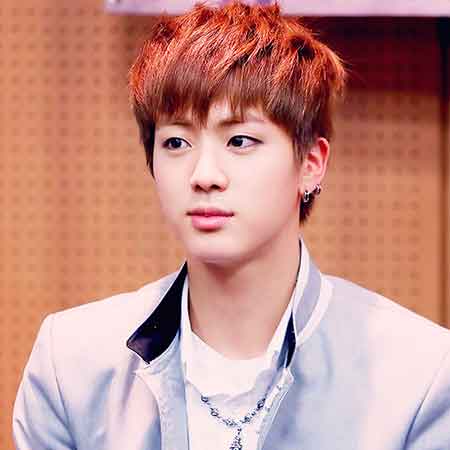 Kim Seok-jin, better known by his stage name Jin is a South Korean vocalist, dancer, and lyricist of the group Bangtan Boys (BTS). He is also the official visual of BTS. Jin is the third guy from the left who took the Internet by storm during the Billboard Awards. He is the oldest member of the K-Pop group.

The famous group BTS is widely renowned. This has sparked curiosity in people about the talented members of the group. So, today we will be exploring the group member Jin’s early life, nationality, career, net worth, ethnicity, relationships, dating life, house and many more. Stay tuned.

Born on December 4, 1992, Kim Seok-jin is a native of Gyeonggi-do South Korea. He is a son of a famous CEO. He has a brother named Kim Seok Jung. Jin is of South Korean nationality and his ethnic background is Asian.

Regarding his education, Jin attended the Konkuk University in Seoul to study art and acting. He graduated on February 22, 2017. He was recruited by a casting agent in Big Hit Entertainment on the street during his university days.

Jin made his debut as a member of BTS with the song No More Dream from their single album 2 Cool 4 Skool on June 13, 2013. Since then he has become the official visual for the group. With his good looks, Jin has managed to win the hearts of many people. The fans of the group call themselves BTS Army.

Jin has brought out many albums with the group like Wings, Dark & WIld, Face Yourself, Wake Up, Youth and more. The group consists of members V, Jungkook, J hope, Suga, Jimin, RM, and Jin. He also co-produced his solo Awake from the album Wings. The talented singer can also play the guitar.

BTS has won many accolades for their contribution to music. They were awarded Seoul Music Awards for their song Blood Sweat & Tears. Internationally, the group has won iHeartRadio Music Award for Best Boy Band in 2018. Aside, BTS also won Billboard Music Awards for Top Social artist in 2017 and 2018.

During the magenta carpet of Billboard Awards 2017, Jin became popular as the third guy from the left. He was positioned in that place for photographs. He is a good looking guy and people appreciated him for it. Apart from good looks, Jin is also a great vocalist and a funny guy.

Jin is not married yet. He is a single guy. The singer has not had any public relationships so far. But like any other famous celebrity, his personal life has sparked interest in many people. Furthermore, Jin’s ideal girl is someone on the chubbier side.

There have been rumors of him dating a comedian named Lee Guk Joo given that she was also not skinny. However, it was later revealed that the idol was not her boyfriend. Apart from that, Jin was speculated to be in a relationship with the girl group Twice member Sana.

However, the vocalist is still single. He is busy with his flourishing career. So, we can assume that he might not have time for dating.

The net worth of the K-Pop star is estimated to be around $8.3 million. His successful career with BTS has helped him to earn a great deal of money, name, and fame. Aside, the combined net worth of the group is $35 million.

Jin lives with the group in one of the most expensive and luxurious apartment complex named Hanam the Hill in Gangnam. One unit in the complex reportedly costs around $75 million.

BTS is experiencing international fame at the moment. Their loyal fanbase has supported the group since the start.