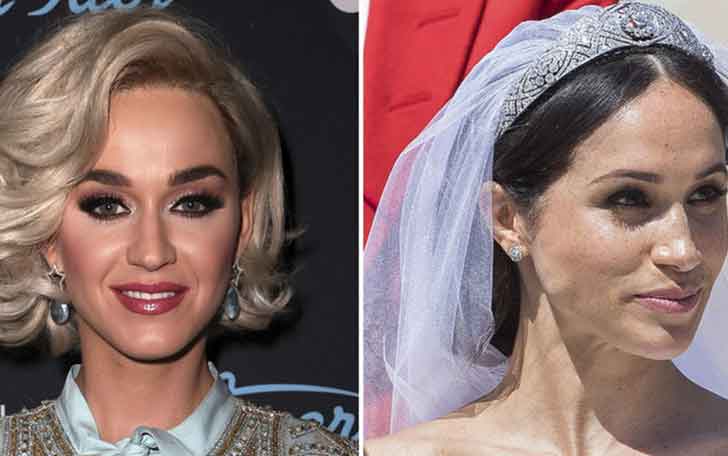 The Royal Wedding of Prince Harry and Meghan Markle on 19th May 2018, has created a buzz over the world. The Dutchess of Sussex’s well kept secret wedding dress was revealed on the wedding day. Well, as it turns out the singer, Katy Perry is not the biggest fan of the Givenchy gown. So let’s find out why?

The Wide Awake singer apparently has a problem with Meghan Markle’s wedding dress choice. Perry said that she felt the dress needed one more fitting in an interview with the Entertainment Tonight during the taping of American Idol.

The wedding dress was designed by British designer, Claire Waight Keller who is the artistic director of French Fashion House Givenchy. The dress featured a boat neckline with three-quarter sleeves. It was a very simple yet elegant gown.

Despite, the criticism for the dress, the American Idol judge said that she was happy for the couple. Perry also praised Markle’s humanitarian works and feminist approach.

Perry is currently not single as she mentioned in American Idol. The singer is back together with actor Orlando Blooms. The actor who has a son with ex-wife and model Miranda Kerr. Perry and boyfriend were seen together on numerous occasions this year. The couple had broken up in March 2017 but looks like they decided to give it another go.

Bloom and Perry first ignited the dating rumors when they spotted being flirty at the Netflix Golden Globe party on 10th January 2016. They were then seen together several times including an Adele concert, Coachella, Hawaii vacation.

After a few months, Perry finally made the relationship Instagram official posting a photo of them together at the Cannes Film Festival. She captioned the picture “we cannes’t”.

Since then the couple was seen together many times in public. In one such instance, while they were vacationing in Italy, Bloom was photographed naked in a paddleboard ride while Perry enjoying her beer.  Furthermore, the two gushed on about each other in interviews.

However, the relationship soon began to deteriorate as rumors about their separation began surfacing in November 2016, citing Bloom was not ready to get married and have babies. The couple finally split in March 2017 releasing an official statement from their reps.

But now, the two are back together. The pair was spotted cuddling at an Ed Sheeran gig in August 2017. Then they were seen vacationing in Japan and Maldives. In recent events, the couple visited the Vatican City and met up with Pope Francis.

This is a great news for all the PerryBloom shippers.