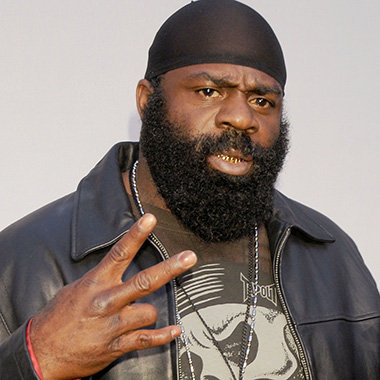 Kevin Ferguson, well-known as Kimbo Slice, was an American boxer and mixed martial artist who came into limelight after his mutual combat street fights that went viral on the internet. For this popularity, Rolling Stone named him “ The King of the Web Brawlers.” He had also represented himself as an actor occasionally.

Kevin started his professional fighter since 2007. He was engaged with his long-term girlfriend Antionette Ray and welcomed six children.

Kimbo was born on 8th February 1974, in Nassau, Bahamas. He was born as a son to Rosemary Clarke and grew up along with his two brothers. He started his school education from Bel-Air Elementary School and later attended Cutler Ridge Middle School, Richmond Heights Middle School, and Miami Palmetto High School.

Slice moved to the United States along with his family and grew up in Florida. His first fight was at the age of 13 when he tried to defend a friend. He was star middle linebacker at Miami Palmetto High School. Later, he attended the University of Miami where he studied Criminal Justice and also attended Bethune-Cookman University where he was the recipient of the athletic scholarship.

“A bird can fly as high as it wants but it eventually has to come down to earth and get some water.. and when it comes down to get that water that’s when you strike.”

Before getting a job as a limousine driver and bodyguard for RK Netmedia, Slice had worked as a bouncer in a strip club. He had a good relationship with the Netmedia and they often went together in fights. In 2002, he was caught by police with a concealed weapon.

Kimbo started his career in unofficial mutual combat street fights. He was named Slice after he left a large cut on Big D’s right eye in his first taped fight which went viral on the internet. He lost against Sean Gannon, which is his only one loss in the on-tape street fight.

Kimbo Slice started his training as a martial artist under Marcos Avellan and David Avellan at Freestyle Fighting Academy in 2005. Initially, he was trained for street boxing but eventually, he began to develop his interest in MMA. On 23rd June 2007, he made his MMA debut after signing against Ray Mercer who is an Olympic gold medalist, at Cage Fury Fighting Championship 5.

The match was held in Atlantic City where he defeated Mercer. During his career, he fought in Elite XC, Ultimate Fighting Championship, and Bellator MMA. After his fight against rival DaDa 5000 in February 2016, he failed a drug test for which he received punishment.

Besides his fighting career, Kimbo Slice had also made an appearance in a commercial of anti-virus and the advertisement was called Caterpillar vs Kimbo. Moreover, he also made his appearance in various films such as Blood and Bone (2009), Locked Down (2010) and Circle of Pain (2010).

Kimbo was diagnosed with heart failure and was in need of a transplant. He was admitted in Northwest Medical Center after he suffered an acute abdominal pain, nausea, and shortness of breath. The Medical Center found out that he had a liver mass and congestive heart failure. No longer after he was placed on a ventilator. He died on 6th June 2016 and has no any evidence of illicit drug use, trauma, or foul play for his death.

Kimbo earned a good sum of money from his professional career. After he went viral, his career took off and landed with different opportunities. He won different matches and tournaments through which he received a huge sum of money.

Moreover, Slice had also portrayed in different movies through which he obtained a decent amount of money. Allocating information from several sources it is found out that his Net Worth was around $ 500 thousand.