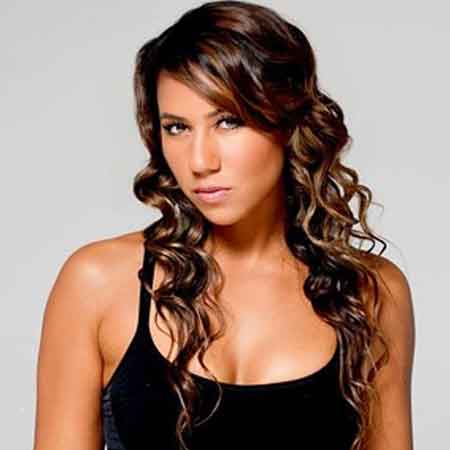 The American professional mixed martial artist Kristi Lopez, also known as Loba currently fights in the women’s flyweight division of Bellator MMA. She is associated with Kings MMA and 10 Planet. Lopez has the record of 2 wins and a loss in her professional career. She also has a blue belt in Brazillian Jiu-Jutsu.

Kristi Lopez is in a relationship with actor Daniel Moncada. The two have been dating for some time now. To know more about Lopez’s life, career, education, early life, net worth, relationships; keep scrolling.

Lopez was born on 4th February 1983, in Lancaster, California. Lopez is of American nationality. There is not much information regarding her parents. Moreover, her family has been very supportive of her MMA career.

Lopez had three brothers. She went through a tragedy in her life as her younger brother died in an accident at a young age.

As for her education, Lopez has two Bachelors degree. She attended college twice to get her Bachelors Degree in Arts and Nursing consecutively.

Lopez was inspired to train after the untimely demise of her brother. She struggled with her brother’s death. With the help of her family, Lopez was able to channel all her energy into fighting. She used to work as a nurse before she chose to train full time for MMA.

As an amateur Lopez has a record of 3 wins and a loss. She took part in Tuff-N-Uff events. Her professional career started in 2014. Her professional debut was against Tyra Parker in Gladiator Challenge, She won the bout via a split decision.

After that, she fought against Katie Castro in the Xplode fight series. Lopez was victorious in the bout via a TKO in 26 seconds of the first round. She then took part in The Ultimate Fighter Season 23. She fought against JJ Aldrich but was defeated.

Lopez later signed with Bellator. Her debut bout was against Jessica Sotack on 25th August 2017. The bout ended in a draw.

Furthermore, Lopez has also acted in various commercials and videos including short film The Two Rickies. She also has a small role in the movie The Shadow Within.

Kristi Lopez is not a married woman. The 35-year-old is currently dating actor Daniel Moncada. The two have been in a relationship for some time now. They share a beautiful bond. They look very happy together. They share many pictures of each other and are supportive of each other’s career.

Lopez is also very attached to her family. She is close to her brothers, mother as well as her father. It would not be wrong to say that she is a family woman who values relationship a lot.

The net worth of Kristi Lopez is currently under review. The source of her income is her fights. Prior to this, she was a nurse which must have also paid her well. She has a record of 2 wins which should have given her win bonuses.

Likewise, Lopez was also involved in acting. Her roles must have earned her a good amount. Lopez is living a comfortable lifestyle.