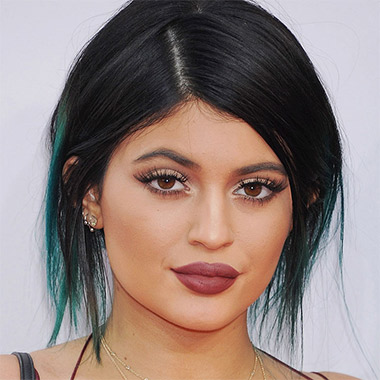 Kylie Jenner is a famous American reality television personality as well as a model and socialite. She is widely known for making an appearance in a reality television show ‘Keeping Up with the Kardashians’ on E! In 2012, she and her sister Kendall partnered with the clothing brand PacSun, and launched their own clothing line “Kendall & Kylie”.

Kylie was born on August 10, 1997, in Los Angeles, California, US. She is born to 1976 Summer Olympics decathlon winner Caitlyn Jenner and TV personality Kris Jenner. She also has an older sister named Kendall. She has three older half-sisters named Kim Kardashian, Kourtney Kardashian, and Khloe Kardashian. She also has an older half-brother named Rob Kardashian. Her three older half-brothers are Burt, Brandon, and Brody Jenner and half-sister Casey from Caitlyn’s side. She studied at Sierra Canyon School and was the member of the cheerleading team. In 2012 she started homeschooling. She expects to graduate with a high-school diploma in 2015.

She has two nail lacquers called Wear Something spar-kylie and Rainbow in the S-kylie. In 2013 they earned $100000 each for their OPI endorsements. On February 2013, the Jenner sisters launched The Kendall & Kylie collection with PacSun. They have released several collections. The Jenner sisters launched a jewelry line to create the Metal Haven by Kendall & Kylie jewelry collection in July 2013.

With her sister Kendall, she has co-hosted several public events. On August 6, 2011, they have hosted Glee: The 3D Concert Movie at the Regency Village Theatre in California. On February 6, 2012, they hosted the premiere of The Vow in Hollywood, California. On March 12, 2012, they interviewed the cast of The Hunger Games at The Nokia Theatre L.A. Live. On June 15, 2014, she made her acting debut when they together hosted the 2014 Much Music Video Awards.

She began her modeling career doing a photoshoot with photographer Nick Saglimbeni. She also modeled for her cousin Natasha’s clothing company. After that, she gained an interest in acting. Jenner’s sister appeared in the music video “Recognize” of PartyNextDoor featuring Drake in August 2014. Kendall and Kylie Jenner were featured as Style Stars of the year by Seventeen magazine in 2011. They were selected as “Style Ambassadors” for the magazine. She has been featured in various teen, fashion, and beauty magazines. Some of the magazines are Teen Vogue, Seventeen, Girlfriend, Marie Claire Mexico, Remix, Cosmopolitan, and Seventeen Prom.

She has auctioned off her old clothes and raised money for the Children’s Hospital Los Angeles. In 2013, The Kardashian and Jenner sisters raised $277469.60 for charity using eBay. On November 10, 2013, she joined her family in a charity yard sale. On January 19, 2014, she joined Khloe Kardashian, Lil Twist, Kendall, and The Game for a charity bowling game in California. They raised money for The Robin Hood Foundation.

Kylie Jenner, who has a net worth of $11 million dollars (2016) purchased a five-bedroom, 5.5-bath mansion in an upscale gated community in Calabasas, California in $2.7 million in February 2015. In 2014, she started dating rapper Tyga. The couple was often seen in public holding hands until they ended their relation in May 2016. But Jenner and Tyga restore friendly relations in July 2016.