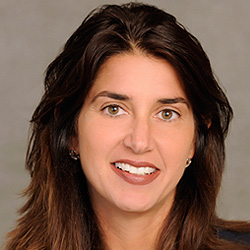 Laure Gentile introduces herself as a Senior Vice President at ESPN who has been overseeing the espnW business. She has also contributed to an expansion of ESPN’s presence in the lives of women who are associated with sports and who loves sports.  She played a vital role in launching ESPN’s first dedicated business established to serve women in sport, esnpW.com. With her hard work and dedication, espnW.com has become the premiere sites for women who love sports.

Talking about her early life, there is not much information about where she was born and when she was born. Covering her academic qualification, Laura C. Gentile graduated from Duke University with a double major in English and Political Science. Later on, she did MBA in specialized in Marketing and Organizational Behavior from Carroll Graduate School of Management, Boston College in 1996. During her days in Duke, Duke made its first ever appearance in the NCCA Tournament. Gentile was honored with All-American and All-ACC in field hockey when she was an undergraduate. She also led Duke hockey team two times as a captain.

Laura C. Gentile started to work as a director of advertising and marketing in ESPN from January 2003. Before she started her career in epnW, she worked at ESPN as vice president, chief of staff. On that position, she worked directly with the president of ESPN Inc and ABC Sports George Bodenheimer dealing with all aspect of company’s business. Gentile also has experience of working as a senior director of brand management in ESPN’s marketing department. In that role, she dealt with the marketing direction for the NFL, SportsCenter, and the NHL. She worked for the promotion of ESPN’s 25th-anniversary event which created the first online community of fans of ESPN.

Besides her career in ESPN, she served U.S. Department of State’s Council, that focuses on empowering women and girls through sports after she was nominated by former secretary of State Hillary Rodham Clinton. She has also been working on the Women’s Sports Foundation Advisory Panel. She also worked for Ogilvy & Mather as a partner and Management Supervisor for four years from 1999. During her days in Ogilvy, she was on a team that developed IBM’s e-business infrastructure campaign. For her contribution in empowering women and girls through sports, she was awarded Advertising Women of NY Changing the Game Paradigm Shift Award in April 2013. She also received WICT’s Signature Accolade for sports Mentoring program of epsnW. With the experience of more than 15 years in sports marketing, she is considered as one of the highly experienced personality working to promote the sports culture among girls and women.

Coming to her personal life, Laura Gentile has maintained the distance between her personal life and professional life i.e. she has not spoken anything about her personal life in media. She might be a married woman but without any proof, it cannot be confirmed. Describing her outer looks, she has got pretty face and a dark red lipstick adds beauty on her face. To get more information on what she has been doing to empower women and girls through sports, follow her on twitter and Instagram.