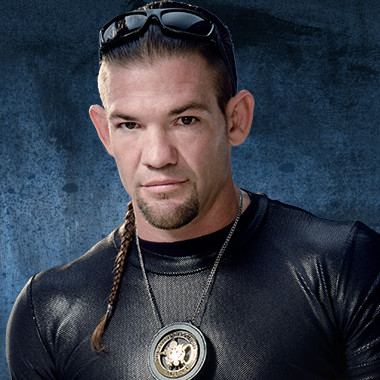 Leland Chapman is an American bail bondsman and bounty hunter. He is best known for his roles in the reality TV series, “Dog the Bounty Hunter” and “Dog and Beth: On the Hunt”.

Leland got married to Maui Chapman in 1995 at  Kailua, Hawaii, United States but they ended their ten-year-old marriage in 2005. The former couple had Dakota and Cobie children.

Born as Leland Blane Chapman on 14th December 1976, in Groom, Texas.  He is the second son of Duane Chapman Sr. and  La Fonda Sue Darnall. At the age of seven, his father was sent to prison. But did not meet his father until he was eight years old, which ultimately led to his parents’ divorce.

He was just eight years old, when his family moved to Colorado Springs, Colorado, to reunite with his father, Duane “Dog” Chapman, who had recently been released from prison for a murder conviction.  Chapman joined a gang as a teen while residing together with his mother and was eventually sent away to live together with his dad.

Despite some troubled teenage years, in 1995, he graduated from high school and managed to turn his life around. At the age of seventeen, he began training in MMA and boxing until a knee injury forced him into retirement.

He along with his brothers, Duane Lee and Wesley Chapman formed the company ‘Chapbros Media’ launched an iPhone, iPod Touch and website talent contest application called, “Show Off”. The company is no longer in business. It was reportedly shut down by Duane Lee and Leland in 2011.

On 21st March 2012, the episode showed Duane Lee telling Beth “You want me fired, you gotta fire me,” and then Leland weighed in, saying “I quit too.” In 2012, the two brothers admitted leaving the show.

Leland Chapman rose to fame after his family business of bail bondsman and bounty hunting became a subject of hit reality shows: A&E’s “Dog the Bounty Hunter,” which aired from 2003 to 2012.

In April 2013, “Dog” Chapman’s new television show, Dog and Beth: On the Hunt, debuted on CMT. The show features his wife Beth, and Leland going across the country giving bail bondsmen businesses advice and assisting them with bounties. The pilot episode featured Chapman and Leland working together for the first time since their split in 2012.

Season 3 premiered on 18th July 2015 and ended in August 2015. Beth Chapman announced on 12th January 2016, that the Chapmans were leaving CMT (with all rights to the show and other shows featuring the team), effectively canceling the show.

On 14th September 2006, Lee and his team were responsible for the capture of Max Factor cosmetics company heir Andrew Luster, who was convicted for drugging and raping several women, in Mexico.

On 14th September 2006, Leland Chapman was arrested along with Duane “Dog” Chapman and Tim Chapman and released from custody on bail; Leland and Tim Chapman’s bail was set at $100,000 each, while Dog’s was set at $300,000. Lee was also charged by Mexican authorities for not handing Luster over to them, though the charges were eventually dropped.

Talking about his personal life, he got married to Maui Chapman in 1995 at  Kailua, Hawaii, United States but they ended their ten-year-old marriage in 2005.

The former couple had two sons together named, Dakota and Cobie. After their separation, Maui got the custody of their children.

After separation with Maui, Leland is linked with a tattooed model Jamie Pilar Worley. Leland and Lynette met each other an event show at a social function. Though there are no reports of when the two started dating, we can say that they are so much in love with each other. The couple got married in 2016 in a private ceremony.

Prior to this, Leland had a daughter, Leiah, with then-girlfriend, Lynette Yi. Hence, if he does not want to disclose anything associated with Lynette except their daughter, we can assume that Leland and Lynette are not together anymore. And according to Lynette’s Instagram profile, we found out that Lynette is dating Jason Ridge.

Leland Chapman, 5′ 5″, is active on social networking sites like Facebook and Twitter. Allocating information from several sources as of 2018, Leland Chapman has a net worth of $500,000 dollars.

On 15th September 2017, Us Weekly confirmed that his stepmother, Beth has been diagnosed with Stage 2 throat cancer. She has a T2 tumor in her throat which is blocking her breathing. Doctors have prescribed immediate treatment and surgery before the disease progresses.

According to Mona Wood-Sword, the family’s spokesperson in Hawaii reported that Chapman is planning to undergo emergency surgery this weekend.