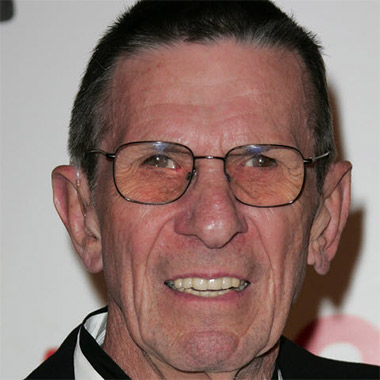 Leonard Simon Nimoy (March 26, 1931-February 27, 2015) was an American actor, photographer, film director, singer, songwriter, and author. He was well known for the character Mr. Spock which he portrayed in Star Trek franchise both in television and film.

Nimoy started to teach acting classes in Hollywood and making a minor film in his early twenties. He had several appearances in televisions and played in television series “Kid Monk Baroni” in the main role but it was not successful. He played Narab, a semi-alien character in movie serial Zombies of The Stratosphere in 1952 as one of the Martian invaders among three. Nimoy’s first appearance in rejected star trek pilot The Cage was in December 1964 and played his character as Mr. Spoke until the last production in 1969. After that, he has been seen as Spoke in eight feature films and various series.

Nimoy’s birthplace is the west end of Boston, Massachusetts and he is the son of a Jewish immigrant from Ukraine. His parents are Max Nimoy and Dora. He has an elder brother named, Melvin.

Nimoy used to act in children’s and Neighborhood Theater at the age of eight and his grandfather wanted him to be an actor but his parents wanted him to join college and have a stable career. His first major role was in an amateur production of Clifford Odets’ Awake and Sing which shows the suffering and struggle of a Jewish family. He played the character Ralphie and he was 17 at that time.

Nimoy earns and saved $600 from selling vacuum cleaners and started drama classes at Boston College and Marlon Brando became his role model. He was also working in an ice-cream parlor to make money.

Nimoy served in United States Army Reserve at Fort McPherson for 18 months starting in 1953 and leave as a sergeant. He directed A Streetcar Named Desire during his period in the military where he gained the larger audiences.

His character Mr. Spook was the most important character he ever played and most popular alien character in the history of television. This character has also left a cultural impact in public. He said that he played his Spook character 14 hours a day and feel like himself only on Sundays.

His former wife was Sandra Zober (1954-1987) and his wife at the time of death was Susan Bay. His net worth was $45 million and he won 3 Emmy awards. He is the author of I am Not Spook and I am Spook.

His famous quotes are:

3)    I think it’s my adventure, my trip, my journey, and I guess my attitude is, let the chips fall where they may.

Nimoy died at the age of 23 due to complications from COPD in his Bel Air Home. He was survived by his wife, a couple of children, his elder brother, six grandchildren, and great-grandchildren. He has left a net worth of $45 million dollars.