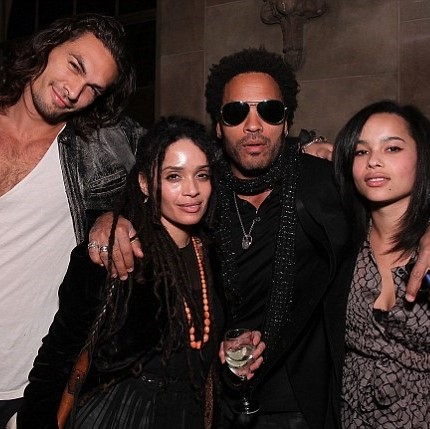 Hollywood celebrities have many stories with regard to their private life, but not like, Lisa Bonet’s love life. The renowned actress, best known for portraying Denise Huxtable on “The Cosby Show,” has a unique story. So, without further delay, let’s break it down…

Lisa started dating yoga instructor Bryan Kest and began living together. It was around this time that Lisa legitimately changed her name to Lilakoi Moon, although she still uses the name Lisa Bonet for her entertainment career.

The Story of Lisa Bonet and Lenny Kravitz

Lisa Bonet‘s publicly known affair starts with Lenny Kravitz, a musician. Kravitz, 5ft 7in, heavily tattooed and pierced met Lisa at a concert in Los Angeles. At that time, both were with another partner, however, the attraction was immediate. ‘It was love at first sight for me. I knew it was the real deal,’ he has since said.

During that time, Kravitz was going by the name Romeo Blue and was still struggling to land his big break and was deeply saddened by the news of his parents’ divorce. Lisa, however, was renowned because of her part on TV’s “The Cosby Show.”

The two fell in love and quickly moved in together. It wasn’t long after they started dating that Lisa and Lenny’s relationship was all over the tabloids. The two lovers were said to be soulmates, as they both shared a neo-hippie persona and biracial background; both are half-Jewish and half-black.

On 16th November 1987, within a year of that meeting, they wedded in Las Vegas, on Lisa’s 20th birthday. The couple’s bond existed on a very intense level. Kravitz says: ‘We were too young, we were babies. Our marriage was not based on reality.’

In 1988, the young couple had a daughter named Zoë and remained married for a few years before separating in 1993.

Lisa’s explanation for the split- was that Lenny’s womanizing destroyed the marriage. As Kravitz’s career took off, he started to tour in various countries and began to play the field. Lisa was so devastated that her behavior on the set of “The Cosby Show” became distinctly unpredictable.

Eventually, in 1991, she was fired from the show and announced that she had divorced from Kravitz and lost her job. ‘My husband is running around with every blonde in town and no one can understand why I am not performing,’ she whined.

One of the blondes being referred to is supposed to have been Madonna, with whom Kravitz worked together on her hit song “Justify My Love.” However, Kravitz denied that their relationship was nothing else more than professional.

Whatever the truth, after Lisa walked out Kravitz realized he had made a terrible mistake and wrote the song “It Ain’t Over” about his agony at the split. Be that as it may, it was past the point of no return.

Lisa took up with a yoga instructor, Bryan Kest meanwhile, Lenny began dating French singer and actress Vanessa Paradis. Then came Kylie Minogue, with whom he enjoyed an eight-month romance in 1993.

In 1999, Kravitz was seen ‘furiously snogging’ Kate Moss at a club. Half a month later he and Stella McCartney supposedly vanished into the direction of the restroom at an awards show in New York, although Kravitz says nothing happened. Then he was photographed with Naomi Campbell, and soon came the turn of Natalie Imbruglia.

In 1992, Lisa started dating yoga instructor Bryan Kest and began living together. It was around this time that Lisa legitimately changed her name to Lilakoi Moon, although she still uses the name Lisa Bonet for her entertainment career.

Bonet, who spent a lot of time feeling alienated and rejected, started dating actor Jason Momoa in 2005. After two years, the couple married in 2007. On 23rd July 2007, Bonet gave birth to her second child, Lola Iolani Momoa, her first with Momoa.

On 15th December 2008, the couple had a son named Nakoa-Wolf Manakauapo Namakaeha Momoa.

Lisa Bonet and Jason Momoa, How Did They Meet?

According to some media, back in 2007, Jason was dating Australian actress Simmone Jade Mackinnon. In 2004, the former couple was planning to tie a knot but a year later, they decided to end their relationship. Jason and Simmone’s relationship lasted for seven years.

Lisa Bonet revealed that she was pregnant a short time after Momoa and Simmone’s broke up. The former Game of Thrones actor explains that he met Lisa through a mutual friend. He says that it was love at first sight. He has had a crush on her since she played Denise Huxtable on “The Cosby Show.”

On 11th February 2016, Bonet and her ex-husband, Lenny united to join their daughter Zoe at the Saint Laurent fashion show in Los Angeles but they showed no sign of discord. Inside the fashion show, Lisa and Lenny sat together in the front row at the star-studded event.

Yet, Lisa and Lenny are the living evidence that there doesn’t need to be any ill will between exes. In 2015, at an interview with Ocean Drive Magazine, Zoe disclosed that the relationship between all three of her parents is all great. She says:

“It makes things so easy that my parents are still very close, they have so much love for each other,” she says. “My dad and my step-dad (Jason Momoa) get along really well, and my dad loves and is close to my brother and sister. It’s really beautiful. As long as everyone can be in the same room together, and have to love for each other, it’s totally healthy.”

With their separation two decades behind him, Lenny feels he has increased point of view on why their relationship played out the way it did. “I see now what it was all about: It was really all about bringing this beautiful child to the planet,” he says about Zoë.

Today, Lenny and Lisa get along perfectly. “Zoë’s mom and I now are best friends,” he reveals. “When we’re all together now — her man, her kids, Zoë, me — we’re all together and we’re one big, happy family. It’s beautiful and it just shows you what can be done.”