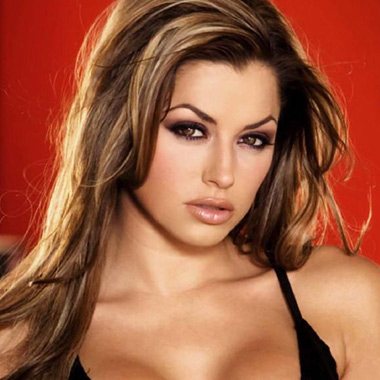 Louise Glover is an English glamour model. She is mainly known for her appearances in FHM, Maxim, Bizarre and Loaded. She became the first British model to be named “Model of the Year” in Playboy Special Editions.

Louise was born on February 8, 1983, in St Helens, England. She had a difficult childhood. She grew up partly in Great Yarmouth with her mother’s and partly in foster care. Because of which she used to be bullied and was a very shy and quiet child. During her early days, she changed schools as well as home many times. When she was 15 years old she was released from foster care and started living in her own apartment. Her favorite sports pastime is scuba diving. She has a goal to dive in the seven seas. Louise is married to Mr. Ben

At the age of 9, she started her modelling career. She was noticed by a photographer while she was on a shopping with her mother. She was compared to a young version of Lorraine Chase from the TV show Emmerdale by the photographer. She herself found her passion of being photographed. When she was 12 years old she decided to be a professional model. At the age of 14 years, she started to enter in the modelling contest and beauty pageants. When she was 17, she became a finalist for the beauty title Miss Great Britain.

At the age of 18, she traveled to London to be a national finalist. She was studying Holistic Therapy at St Helens College at that time. In 2000 she travelled to Belize with a Raleigh International project. She was highly motivated while she was in Belize for ten weeks. She then presented Great Britain in the Miss Earth contest in the Philippines at the age of 19. In 2002 she started getting paid for her work. She became glamour model appearing in FHM, Maxim, Bizarre, and Loaded. She was also featured in TV shows as well as documentaries which include National IQ Test, Dream Team, and Blaggers. She appeared as a clothing model for sex Symbol denim wear, Ed hardy clothing and Austin Reed ladies wear.

She also did photo shoots in countries like USA, Germany, Australia, Canada, Russia, South America, Sweden, South Africa and Spain. After her modelling success, she supported Raleigh International and also raised funds for the group. For raising the fund to help Raleigh International, she climbed the highest mountain in Malaysia, Mount Kinabalu. She has also taken kickboxing classes to defend herself.

According to her, to appear in Playboy magazine was her important goal. During her photo shoot in Los Angeles, she met publisher Hugh Hefner. She was 21 years old then. She was offered a test shoot by him so she visited the Playboy Mansion. In January 2006 she appeared on the cover of Playboy Vixens magazine. She became the winner of Playboy special Editions Model of the Year 2006. She was on the cover of Playboy Lingerie which she calls as her favorite magazine cover. After posting for a celebrity cover she became the UK’s Penthouse ‘Pet of the Month” in March 2007.

In 2007, she won Miss Hawaiian Tropic UK. She also appeared in her first music video acting role for Scouting for Girl’s single “She’s So Lovely”. She also wanted to be a fitness model.