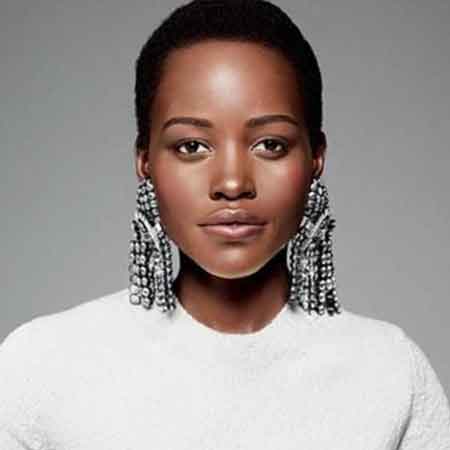 A Mexican-Kenyan actress, Lupita Amondi Nyong’o a.k.a Lupita Nyong’o is best known for her Oscar-winning role Patsey in 2013 film, 12 Years a Slave. She is the first Mexican actress to win the award. Recently she is also popular for her appetence in 2018 Marvel film Black Panther as Nakia.

Lupita was born on March 1, 1983, in Mexico City to Kenyan parents. Her family left Kenyan because of the political repression and unrest. She has dual Kenyan and Mexican citizenship. Although she was born to Kenyan parents, she grew up in an artistic family.

She attended Rusinga International School in Kenya and since then she started acting in the school plays. At the age of 14, she made her acting debut in Romeo and Juliet as Juliet. She later received an IB Diploma in 2001 form St. Mary’s School in Nairobi. She went the United States for college- Hampshire College and received a degree in film and Theatre Studies.

Lupita started her career by working as part of the production crew for different films like The Constant Gardener, The Namesake, Where God Left His Shoes. Lupita revealed that Ralph Fiennes was the one who inspired her to pursue a professional acting career.

Lupita landed her breakthrough role for the historical drama 12 years a Slave as Steve McQueen, after completing her graduation from Yale University.

Lupita co-starred The Jungle Book in 2016. She served as a special force for Wakanda and personal bodyguard for Black Panther/ Chadwick Boseman. In the superhero film Black Panther. As of 2018, she will be making her writing debut with a book- Sulwe. It will be published by Simon & Schuster Books for Young Readers.

Well the African most powerful young women, Lupita Nyong’o is currently single. But there were many speculations regarding the actress dating Black Panther’s co-star Michael B Jordan. They appeared in the super hit film Black Panther and it looks as if their onscreen romance came true in their real life as well.

Youtube: Are Michael B. Jordan and Lupita Nyong’o dating?

Not only in the film Black Panther, they appeared together at numerous interview and event together and this made their fans and media that they are a couple.

Moreover, Lupita was previously involved in a relationship with Canadian musician and singer, K’Naan in 2013. But their relationship didn’t last long and they broke up just after a year in 2014.

Lupita is the top 10 highest-paid actress for 2018 with an estimated net worth of $75 million in combined earnings. Although the actress’s career was winding down, she suddenly was back on the top from the movie 12 years a Slave, Non-Stop, Star Wars: The Force Awakens, The Jungle Book, Star Wars: The Last Jedi, Black Panther.

Talking about the only net worth of Lupita, she has accumulated $8 million only form her acting career. She also has been involved in various charity projects and organizations. As she is involved in the organization Mother Health International. She launched anti-poaching “heart and mind” campaign in 2016.