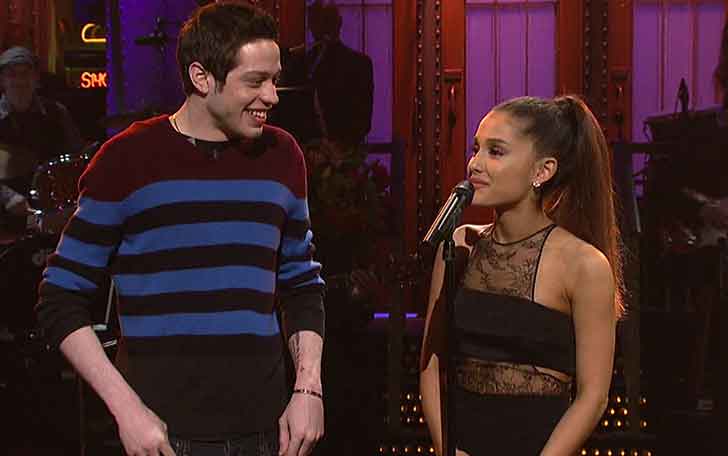 New Couple Alert! Ariana Grande is reportedly seeing someone new. The new guy is none other than SNL comedian, Pete Davidson. This news comes after she confirmed her breakup with longtime boyfriend, Mac Miler almost two weeks ago. It looks like the singer is ready to put her past behind and move on with her life.

Grande is currently busy with promotions for her new album, Sweetener that is set to release on July 20, 2018. She is back on the grind and fans are more than excited for more new music. But today we will be talking about her new relationships, dating life and affair.

No one had seen this coming. Ariana Grande is reportedly dating comedian Pete Davidson who is the youngest cast member to ever join Saturday Night Live. Both of them had recently gone through a breakup with their respective partners. It looks like they have found solace in each other’s company.

The relationship is still at the beginning stage according to the tabloids. The news began to circle around on May 18, 2018. Apparently, they are casually dating.

It is suspected that the two met for the first time in 2016 during their SNL gig. The two were in a relationship at the moment. But now after breaking up, the two seem to have kindled a romance. Furthermore, they were reportedly spotted hanging out in the Billboard Awards.

However, Grande and Davidson are still to comment on the reports. They have not officially confirmed the rumors. They might not be in a serious enough relationship to address it publicly. Hopefully, soon they will feel comfortable to talk about their relationship so we can get more details about this unexpected pairing.

Like mentioned above, both Grande and Davidson have recently come out of their past relationships. Ariana Grande and Mac Miller’s break up was reported by multiple outlets on May 9, 2018, citing busy schedules as the reason.

Ariana addressed the breakup via an Instagram story saying that they are still good friends and have nothing but respect for each other. You can see the story below. The two broke up after being together for over two years.

On the other hand, Pete Davidson also recently broke up with his girlfriend of two years, Cazzie David who is the daughter of Larry David. He announced the separation on Complex’s Open Late on May 17, 2018, stating “We’re not together anymore. Very talented girl, she’ll be great and she’ll be fine.”

Well, now Grande and Davidson have gotten together after breaking it off from their respective partners. Fans are surprised about the news. Perhaps they are taken aback by how quickly the two got together.