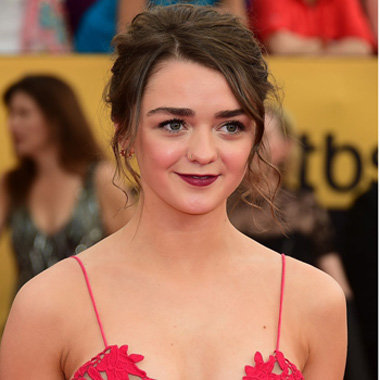 Maisie Williams is a beautiful English actress and dancer. She is mainly known as Arya Stark in television series Games of Thrones. She was awarded the 2012 Portal Awards as Best Supporting Actress, BBC Radio 1 Teen Award, and Best Young Actor for her role. She was also nominated for Scream Award for Best Ensemble and Young Artist Award for Best Performance by a Supporting Young Actress.

Maisie was born on April 15, 1997, in Bristol, England, United Kingdom. She was born to Hilary Williams who is a former university course administrator. She is the youngest of four children. She was raised in Somerset. She studied at Clutton Primary School. She then attended Norton Hill School in Midsomer Norton. She then moved to Bath Dance College and studied Performing Arts.

She played as Arya starks in television series Game of Thrones since 2011. The character is a tomboyish young girl from a noble family. She was highly praised by everyone for her role in the series. She also performed in the show’s second season and was continuously praised. In 2012 she won the Primetime Emmy Awards as Best Supporting Actress. She was also awarded Portal Award as Best Young Actor. She became the youngest actress ever to win the Best Supporting Actress category at the age of 15 years. She was nominated for Young Artist Award for Best Performance by a Supporting Young Actress. She won the BBC radio 1 Teen Award as Best British Actor in November 2013.

She played in the series The Secret of Crickley Hall as Loren Caleigh in 2012. She then was seen in Heatstroke and Gold. Both of the films were independent films. She then appeared in the short films Up On The Roof and Corvidae. She then signed to play in the film We Are Monsters as Lorna Thompson. The film was set for a release in 2014. She played in the British film The Falling as Lydia. The film was set for 2015 release. She appeared in Cyberbully in January 2015. She was awarded at the 65th Berlin International Film Festival with a Shooting Stars Award in February 2015. She was announced to guest-star in the episode of Doctor Who on March 30, 2015.