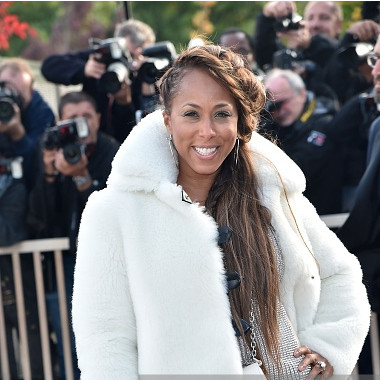 Marjorie Bridges-Woods is the current wife of acclaimed Comedian and Tv personality, Steve Harvey. She is often seen in various events with her husband since they got hitched in 2007. Bridges-Woods is eight years younger than Harvey, but she is never afraid to speak her mind out and support her better half in the face of any and all adversity.

Marjorie Bridges was born on the 10, October 1974. A native of America, she belongs to an African-American ethnicity.

According to an article in Essence (February 2014), Steve and Marjorie met at a Memphis comedy club in 1990, where he reportedly stood in front of an audience and announced upon seeing her walk into the room, “I don’t know who you are but I’m going to marry you.”

They dated briefly before splitting but reconnected in 2005. The outlet reports saying, “Every great man has a woman… I didn’t say, successful man, I said great man. Yeah, maybe you’re successful if you sign a $16 million NBA contract. But greatness is when you’re the husband and father you’re supposed to be. When everyone surrounding you looks up to you, depends on you, and you come through for them. That’s greatness.”

Besides her daily chores, Marjorie functions as a fashion blogger. She spoke to BET about her love for fashion, telling the outlet, “For as long as I can remember I’ve always loved putting together great looks that combine beautiful colors and lavish textures in a captivating way. Anyone who knew me in high school or in my early years often says they are not surprised by my present endeavors, namely my blog, The Lady Loves Couture.”

Marjorie is often welcomed to attend Paris and Milan’s Fashion Weeks and says her favorite fashion city is Paris.

The Extended Family yet Strong Bond

In 2009, Harvey revealed to Good Morning America, that no one in his extended family’ uses the term stepchildren. I never refer to my youngest daughter as my stepdaughter. She is my daughter.’

The couple’s daughter, Lori has been dating Manchester United soccer hunk Memphis Depay, 23, for months after going public with their relationship in January 2016, according to TMZ.

Like Steve, Marjorie was married twice before her present marriage. She has three children from her previous marriages: Morgan, Jason, and Karli. Steve and Marjorie have four grandchildren– two through Jason’s marriage, one through Morgan’s wedding, and the last through Karli’s marriage.

On 17 Jan 2017, BOOM 102.9 reported that Steve Harvey was set to go to Trump’s inauguration, but ended up declining the invite because of Marjorie. Harvey told the reporters after meeting with the president at Trump Towers, “I’ll be turning 60 on Tuesday, and my wife is taking me far away… So, I won’t be at anybody’s inauguration because my wife said ‘no.’”

Marjorie and Harvey’s divorce isn’t difficult to deal with as it is, it gets to be distinctly harder when you have a vengeful ex behind you. Steve and Marjorie’s relationship was shown in a grimy manner by Steve’s ex Mary Lee when she accused Steve of evicting her from her home and persuasively taking their child, Wynton on the court.

She also went on to post a YouTube video where she allegedly claimed that Steve was having an extramarital with Marjorie before their separation. Later the judge declared that all of her allegations were false and there had been no evidence of Steve’s infidelity as well.