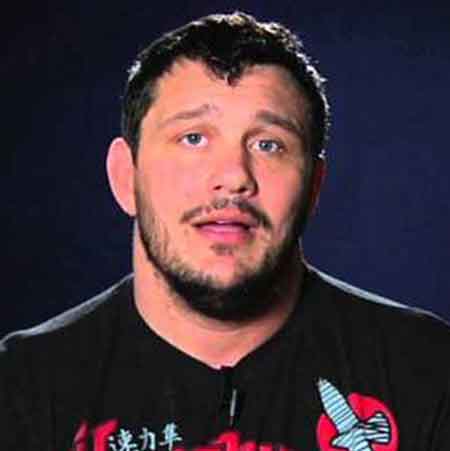 Matthew Steven Mitrione, also known as the Meathead is an American mixed martial artist and former football player. He currently competes in the Bellator MMA. He has also fought in UFC and was a cast member for the Ultimate Fighters. The fighter has a professional record of 13 wins and 5 losses. Mitrione also played football professionally in NFL.

Mitrione is a single man. He is the father of three children. He was married but later got divorced. So, whom did he marry?

Mitrione was born on 15th July 1978, in Springfield, Illinois to parents Cecilia and Robert. He is of Irish and Italian descent. He attended Sacred Heart-Griffin High School for the first four years. He always has been athletic and even at a young age was involved in swimming, football and track and field.

For higher education, Mitrione attended Perdue University where he played college football. He played 35 consecutive games for the Boilermakers but ended up breaking his foot during winter conditioning practice.

Mitrione was signed by New York Giants in 2002. However, after injuring his foot again in 2003 playoffs, he had to go through seven surgeries. He was unable to walk without crutches for 16 months.

Mitrione was released by the Giants. Soon, he began playing with the San Francisco 49ers. He was also the member of Vikings for some time.

Mitrione then turned to MMA when his close friend and basketball player, Jayson Werth invited him to play for the inaugural promotion. He later appeared in the tenth season of Ultimate Fighter.

There, he defeated Scott Hunk via majority decision but later lost to James Mc Sweeney. His professional MMA debut was against Marcus Jones on 5th February 2009.

The fighter was then signed by UFC. He fought and won against Kimbo Slice, Tim Hague, Phil De Fries, Derrick Lewis, Shawn Jordan and many more. On the other hand, Mitrione was defeated by Cheick Kongo, Roy Nelson, Brendan Schaub, Ben Rothwell, Travis Browne while in UFC.

After Mitrione’s contract ended with UFC, he announced that he signed with Bellator MMA on 14th March 2016. His debut Bellator fight was against Carl Seumanutafa on 24th June 2016. He won the fight via a KO. He has a current streak of four wins against Oli Thompson, Fedor Emelianenko, and Roy Nelson.

Matt Mitrione is a divorced man. He was married to ex-wife, Tina Mitrione. The two got amicably divorced after nine years of being together in December 2014. He has two sons; Jacob Mitrione, Jonah Mitrione, and a daughter from the marriage.

Mitrione is a family man. He loves spending time with his children. He is a good father. So far there have been no rumors about him dating anyone after divorce. We can assume that the fighter is currently single.

Mitrione has earned a huge amount of money from his successful MMA career. His net worth is currently under review. As per all his disclosed pays, he has earned around $310,000. He reportedly had a salary of $644,000 while in UFC. Mitrione must earn a good amount including all his win bonuses.