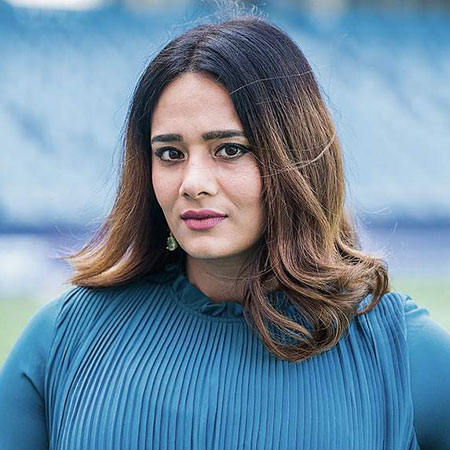 She gained her interest in football when she was in the USA. Mayanti spent 4 years in New York, where she completed a swimming training and also participated in football leagues.  She was in the States because her father  UN obligations.

During her college days, she was in her college football team. Then, she also trained with the Super Soccer Academy. As a college student, she later grabbed an opportunity to cover a broadcast of  FIFA beach football as a guest anchor.  After the successful stint, she was then offered a host and associate producer job for Football Café by  Zee Sports.

She then worked for various football shows on the Zee network. During her Zee tenure, she did commentary as well as interviews during pre-match, half-time, and post-match shows. Zee Network had primarily assigned her to cover European but later the network assigned her to cover Indian Football.

She has likewise served on Zee Sports as the anchor for the Nehru Cup, which held in New Delhi at the Ambedkar Stadium.

After Zee network, she joined  ESPN (now Star Sports) as a host of ESPN’s 2010 FIFA World Cup broadcast team. She provided pre-match, half-match, and post-match analysis of the world football competition for ESPN. She along with John Dykes headed a team of expert panelists for the broadcast of the world competition. ESPN’s 2010 World Cup broadcast attracted millions of viewers, thanks to smart coverages from personalities like Mayanti. Nevertheless, she also covered the 2011 Cricket World Cup for ESPN.

She then went on to host the 2010 Commonwealth Games for Doordarshan along with Charu Sharma. Then, Mayanti and Charu were credited by millions for hosting the famous competition held in Delhi.  In 2013 December, she hosted India VS South Africa test series for Ten Sports.

In 2012, she got married to a handsome cricketer “Stuart Binny”. Stuart is the son of Roger Binny, who is a famous former Indian cricketer. Stuart was a member of the Indian team for Cricket World Cup 2015. He is a renowned Indian national team player. Nevertheless, he is also known for his critical IPL performances.

Her Twitter account  has got more than 21 k followers (May 7, 2016), whereas she is following 41 people. Likewsie, her Facebook page is liked by more than 26k fans.

She follows Hindu religion. Her mother tongue is Hindi. She has got beautiful long black hair and alluring  brown eyes, which suit her charming personality and soothing voice.

No wonder, she is counted as one of the hottest sports Journalist.