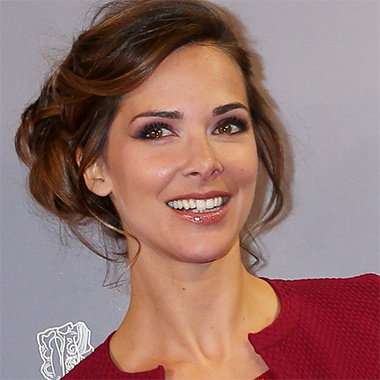 Melissa Theuriau is a French journalist and news anchor currently working for M6. Previously, she served as anchor and co-editor in chief of Zone interdite on French TV.

Currently forty years old, Melissa Theuriau is married. Together with her husband, she shares two children. Further, her net worth is approximately $18 million.

Theuriau has an estimated net worth around $18 million in 2019. According to the source, her annuals salary is over $1 million. Furthermore, she owns a million dollar mansion in St Rémy de Provence, France, with her husband.

Mélissa Theuriau was officially engaged with French-Moroccan actor and comedian, Jamel Debbouze on 29 March 2008. The couple married in a small ceremony on 7 May 2008.

She and her husband share two children; their first son, Léon was born 3 December 2008 and second child and first daughter, Lila was born in the year 2011.

What’s more, Theuriau and Debbouze ranked in the top ten of France’s most popular couples in a Harris Interactive poll for Gala magazine in August 2012.

Mélissa Theuriau was born on 18 July 1978 in Échirolles, France. As per nationality, she is French. Her star sign is Cancer.

She grew up in Échirolles. She earned a DUT in News-Communication from Institut Universitaire de Technologie (Technical University). She later joined Institute of Communication and Media and graduated with a Master’s degree in journalism and mass communication.

Theuriau landed her first job as a reporter at Match TV in 2002 and later in 2003, she was hired as reporter and anchor for the 24-hour national and global French TV news channel La Chaîne Info (LCI). It was during this time she received recognition by the public.

Her big break came when served as a newscaster and travel show host for LCI, the news channel and for TF1. Her shows were LCI Matin (LCI Morning), the 6:40 news on LCI and TF1 from Monday to Thursday and the Voyages travel show on Wednesdays at 13:55 on LCI.

In May 2006, she surprised the management of TF1 by refusing the offer to be the anchorwoman of the weekend evening news of TF1, as a summer replacement for sitting anchorwoman Claire Chazal.

In June 2006, another French television channel, Métropole 6, announced that Mélissa Theuriau will be joining the network in September as editor-in-chief and will be presenting Zone Interdite (“Forbidden Zone”), a weekly investigative reporting show.

In September 2006, she was promoted as the co-editor in chief and anchor of the influential TV magazine Zone interdite (“Forbidden Zone”) on M6.

Theuriau was voted as the world’s most beautiful news reporter by the Daily Express in 2006 and was also voted for the TV’s sexiest news anchor by Maxim. In mid-2007, she was polled as the most beautiful woman in the world by French edition FHM. Paris Match described her as the television bombshell.