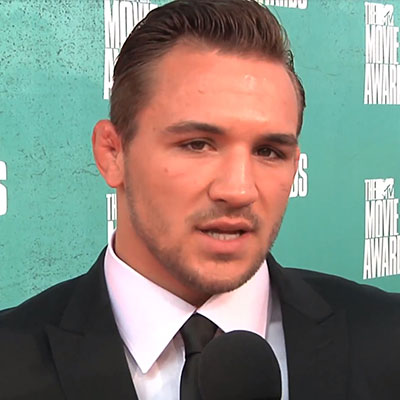 The former two-time winner of the Bellator Lightweight Tournament Champion, Michael Chandler Jr. is currently under contract with the Bellator MMA. The American mixed martial art artist can be seen fighting and the lightweight division.

He is currently a 15th ranking champion in the lightweight division. He is known by the name of Iron. Michael is married to his wife, Brie Willett. They tied the knot on 6th September 2014. In October 2017, the couple adopted a baby boy from Dallas, Texas.

Born in High Ridge, Missouri, the United States on 24th April 1986, Michael’s mother is Betty Chandler and father is Michael Sr. Chandler. He attended Northwest High School and was excellent in both sports and academics.

He was an honor roll and was also voted as the most valuable wrestler in his senior year in the school. After his graduation from high school in 2004, he was accepted at the University of Missouri. He also excelled at the university.

He was the recipient of Division 1 NCAA All-American honors. He was a four-time NCAA qualifier and had secured 100 wins. His major for his undergraduate program was in Personal Finance Management services and did his minor in Real Estate.

After his career in wrestling, Candler joined Xtreme Couture to train in martial arts. In 2009, he made his professional debut by defeating, Kyle Swadley. He didn’t play any amateur matches.

On 20th November 2009, Michael made his debut for Strikeforce where he fought and defeated Richard Bouphanouvong. He won all of his matches in the Strikeforce.

He was signed in by the Bellator in September 2010. He made his debut by winning victor in his first match against, Scott Stapp. Similarly, he won his second bout too.

Later, Michael was moved to the lightweight division, he fought at the Bellator Season Four Lightweight Tournament against Marcin Held. Chandler won the match securing his place in the semi-finals. His win in the semifinals moved him to the finals.

For the finals, he faced Patricky Freire and won the bout taking the title of the championship. Michael’s first title defense was scheduled with Eddie Alvarez, the bout took place on 2nd November 2013. He lost the title to Alvarez.

After his first professional loss, Chandler simultaneously faced two more consecutive loss. He again participated in the Bellator Lightweight Championship, which title was vacant. He won the title but lost it to Brent Primus in his second title defense.

Michael Chandler’s recent match was with Brandon Girtz, which he won.

Michael is married to wife Brie Willett. The couple got engaged in March 2014 and were married on 6th September 2014.

Brie was a finalist at the 2003 Miss Missouri Teen. She studied biology and psychology at Taylor University and did her master of science in Physician Assistant studies from Southern Illinois University Carbondale.

In October 2017, the couple adopted a baby boy from Dallas, Texas. He is named Hap Whitaker. Michael states that despite being able to procreate, it was Brie’s decision to adopt a baby since she was 14 years old.

Michael earns a good sum of money in his career. Allocating information from several sources as of 2018 it is found out that Michael current estimated net worth is around $220,000 USD.

He won $100,000 USD after his win against Eddie Alvarez. He also picketed a win of $50,000 USD from his bout with Benson Henderson. He is rumored to be one of the highest paid MMA players. He is known to do charity work for blessedthreads.com.

He is also sponsored by Dymatize.