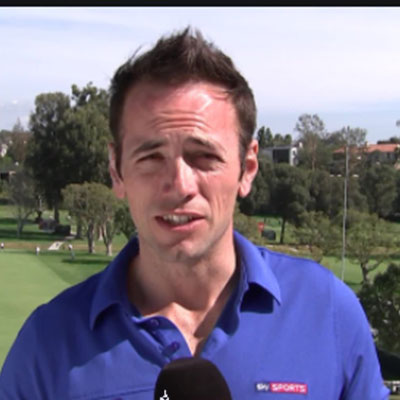 Nick James Dougherty, commonly known as Little Nick in the world of golf, is a retired European English tour golfer. Nick can be now seen as a presenter at Sky Sport’s Golf.

He is married to the beautiful wife, Di Stewart who is a gold commentator. The couple has a son and a daughter together. He is the apprentice of the golf giant and superstar of the golfing world, Sir Nicholas Alexander Faldo.

Nick was born on 24th May 1982 in Bootle, Merseyside, UK. Nick did his schooling at the Queen Elizabeth‘s Grammar School in Blackburn. He is of white ethnicity and of English nationality.

Having an interest in golfing since his early childhood, Nick has played and won several tournaments. He was budding into notice after his win in 1997 Faldo Junior Series where he was awarded Golf Foundation Player of the Year.

After his multiple wins in amateurs games, Nick was coming into the spotlight and finally, in 2001, Nick’s professional career as a golfer began.

He later on 2002 gained the membership to the European Tour. Nick’s exceptional performance on his debut game was highly applauded and was gifted with Sir Henry Cotton Rookie of the Year.

In the year 2003, his career came to a pause after he was diagnosed with glandular fever. Still recovering from his affliction, Nick couldn’t perform well in 2004 too. Determined to do well, Nick was seen on his exceptional form in 2005 where he managed to land on the top 100 of the Official World Golf Ranking after his first win on the European tour.

He was seen on his form in 2007 and landed 7th place in a tie at Oakmont Country Club. Being Nick’s best performance of his career, Dougherty was given direct entry to the US Master’s. Nick also secured his second victory on European Tour and third in 2009.

Due to his declining performance, Dougherty lost his European Tour card in 2011. Success seemed to be away from Nick’s grasp, after a series of downfall and attending Q school on the Challenge Tour, Nick decided to retire.

Nick can be now seen as a presenter at Sky Sport’s Golf.

Currently, Nick Dougherty lives in Sunningdale, Berkshire, England with his beautiful wife, Di Stewart. The romantic couple got married in 2010’s New Year’s Eve and are blessed with a son, Max and a daughter. The family enjoys vacationing together.

He is the apprentice of the golf giant and superstar of the golfing world, Sir Nicholas Alexander Faldo. He still plays golf personally and posts the videos of him shooting on his Instagram page.

Through Nick’s Instagram page we can see that he keeps frequenting to exotic places. He must have enough earnings to support such a lifestyle.