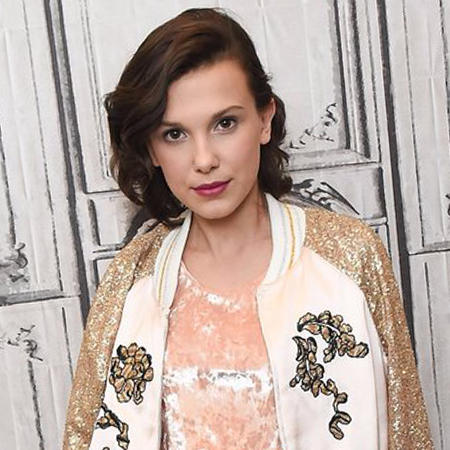 Millie Bobby Brown is a Spanish-born Engish actress as well as a model. She is widely known for her role as Eleven in the Netflix science fiction drama series Stranger Things. Well, Brown was nominated for the Primetime Emmy Award as Outstanding Supporting Actress in a Drama Series.

Millie Bobby Brown was dating her boyfriend Jacob Sartorius but the couple separated. The couple often used to share their picture on Instagram.

Millie Bobby Brown was born on 19th February 2004, in Marbella, Spain. She is the third child among four children of Kelly Brown and Robert Brown. But only two of her sibling’s names are known; brother Paige and sister Ava.

At the age of four, Brown moved to Bournemouth, Dorset along with her family. And after four years, she again moved to Orlando, Florida.

When Bobby was nine years old, She made her acting debut through the ABC fantasy drama series Once Upon a Time in Wonderland, in 2013. In that series, Brown made her guest appearance as Young Alice.

In 2014, Brown starred as Madison O’Donnell in the BBC America paranormal drama-thriller series Intruders. She further made guest appearances in the drama NCIS, a sitcom Modern Family and in drama series Grey’s Anatomy.

Dance it out! We’re one month away from #GreysAnatomy returning! pic.twitter.com/Wg836ZnKP2

After several years of hard work, Millie breakthrough came after she appeared in the Netflix science fiction drama series Stranger Things as Eleven. For that role, She was nominated for the Primetime Emmy Award for Outstanding Supporting Actress in a Drama Series and was able to win Screen Actors Guild Award for Outstanding Performance by an Ensemble in a Drama Series. Her new movie Godzilla: King of the Monsters will be released in 2019.

Millie Bobby Brown was dating her boyfriend Jacob Sartorius but the couple separated. The couple often used to share their picture on Instagram. She is also focusing on her career and is happily living with her family. Moreover, her parents also have healthy relationships.

Allocating information from several soruces as of 2018, it is found out that Millie Brown current estimated net worth is around $7 million which is totally worth and is sure to be increased in upcoming days. She also has a dog of English Mastiff Breed that costs $900-$1000.