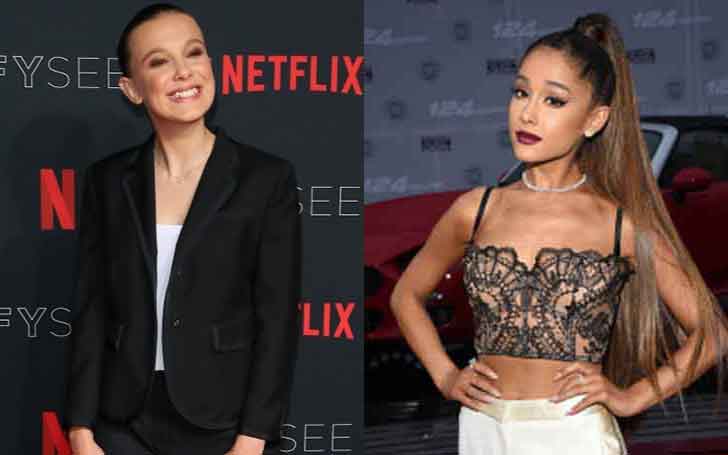 Making a kiss in public is a common thing for lovebirds but making boyfriend and girlfriend at a very young age and sharing a lip lock sounds a bit strange. Isn’t it? Actress, Millie Bobby Brown who is just in her early teenage shared a lip-lock with her boyfriend, Jacob Sartorius on the beach.

The Stranger Things actress, Millie Bobby Brown was spotted kissing her boyfriend Jacob Sartorius on some secluded beach. She is making sure that she is already taken as she stood atop a lifesaver’s perch and kissed her boyfriend.

Although the original picture has been removed, the above picture still roams on the internet. The actress captioned the shot saying Moonlight with him! The post was also seen by the famed singer Ariana Grande as she stated there that she wasn’t even allowed to leave her house until she was 20.

Starting from the beginning of the love story, the actress, and her singer boyfriend dating rumors sparked in October 2017, when Millie posted a picture of Jacob on her Instagram story. After few months of their rumored relationship, Millie posted a picture of her cuddling the teddy bear with a caption stating “Thanks for the bear” and Jacob replied on it saying “Of course” has made their fans to think more about their relationship more.

All the curiosity regarding their relationship was cleared on 14th February (Valentine Day) when Milla tweeted the post wishing Valentine’s day to Jacob Sartorius.

And just a week later, Jacob wished Millie on her birthday with a sweet caption “Happy birthday to this beautiful girl” showing his love for her. He has also stated that she will have a great year ahead and he is very eager to meet her. Moreover, he has also requested everyone to wish her.

These days the couple is very open about their relationship. If we go through their social media post we can see several pictures of them showing love toward each other. Hope the young couple will be able to continue and handle their love forever.