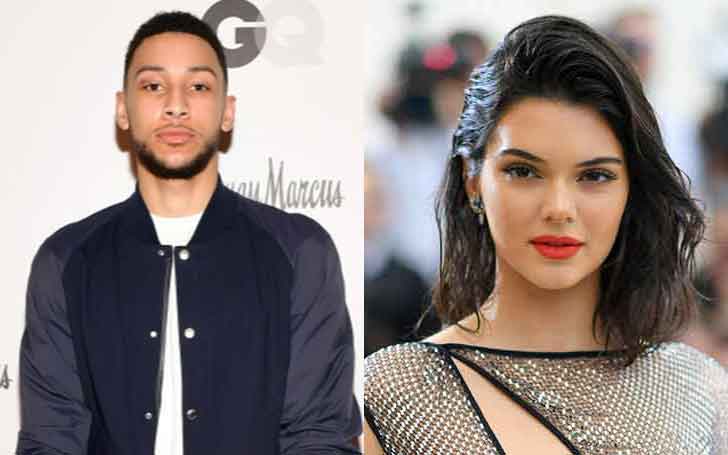 Buzz of a budding romance between the model Kendall Jenner and NBA star, Ben Simmons has been making the rounds in media. After dating few other professional basketball players, it looks like Jenner is now in a relationship with an Australian-born player, Ben Simmons.

Prior to this the social media sensation, Jenner was dating another basketball player, Blake Griffin. Today, we will explore Jenner’s dating life, past affairs, and current boyfriend.

It is a well-known fact that Jenner, 22 loves basketball. So, it might not come as a surprise that the model is dating an NBA player. As per sources, Jenner is now dating Philadelphia 76ers point guard Ben Simmons. Well,  an insider told Page Six that the pair has been dating for a few weeks.

Another source claimed that Jenner and Simmons were recently spotted on a lunch date at the Beverley Hills Hotel. To add up, a third insider revealed that the two were at Lower East Side restaurant vandal with a bunch of friends. The source added that they were smiling the night away.

With these revelations, we can assume Jenner and Simmons are dating. The two are yet to announce their relationship. Perhaps, they will do so in upcoming days. Prior to this, Simmons was dating singer Tinashe.

Kendall Jenner Past Relationships and Affairs

The Keeping Up with The Kardashians reality Tv star, Kendall Jenner has had her fair share of ups and downs in her dating life. She is a beautiful and talented person and many people would love to be her boyfriend. Here are the people that she has previously dated.

Most recently, the model was in a relationship with Detroit Pistons’ Power forward Blake Griffin. The two began dating back in August 2017. They were spotted together during their dates many times. However, Jenner and Griffin ended their relationship in February 2018. The two were apparently seen avoiding each other in 2018 Coachella.

Furthermore, the model was dating rapper A$AP Rocky from July 2016 till August 2017. They publicly announced their relationship in May 2017 Met Gala Ball. The two made a cute couple while they lasted.

The next on the list of Jenner’s boyfriend is another professional basketball player Jordan Clarkson. The two dated from April 2016 till January 2017. The pair was spotted hanging out together and going on dates couple of times.

From 2013 to 2016, the model was linked with singer Harry Styles. The pair never confirmed their relationship. However, they were spotted taking yacht trips and romantic dinners couple of times. The two seemed to be in an on-again-off-again relationship.

Furthermore, Jenner was dating Julian Brooks from 2012 to 2013. He is her high school boyfriend. Brookes apparently cheated on Jenner when he was away at college in Nevada. This was the reason behind their separation.

Likewise, the model has not been spared of various dating rumors. She was rumored to be dating Ashton Irwin, Chandler Parsons, Lewis Hamilton and Ryan Nassif throughout the years.

Well, now Jenner is dating Ben Simmons. The two seem to be in a casual relationship right now.