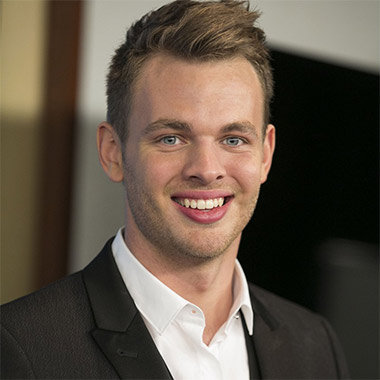 Nick Fradiani, a very amazing and talented American singer was born on November 15, 1985. He is mostly known as the lead singer of pop/rock band Beach Avenue. The band won the Battle of the Bands at Mohegan Sun in 2011. The band also competed in the very popular and most watched reality talent show “America’s Got Talent” in the year 2014. In the year 2015, Nick competed as a solo singer in the television singing competition “American Idol”. He was born in New Haven, Connecticut, United States of America. He is the son of father Nick Fradiani III, who is a musician and mother Elizabeth Fradiani.

Talking about his early life, Nick Fradiani went to Southern Connecticut State University for his academic qualification. He has a sister named Kristen who was born on November 14, 1991. Both the brother and sister went to the same school. In 2004, he completed his graduation from Guilford High School and achieved his Bachelor’s degree in History from Wheaton College, Norton, Massachusetts. Before coming in music line, Nick worked in various organizations and schools.

While coming towards his music career, Nick Fradiani had an interest in music and singing since his childhood but he had never dreamt of making his future in music at that time. At that time it was like his teenage interest which later built up in his passion. He started singing and received regional attention after becoming a lead singer of pop/rock band Beach Avenue and winning the Battle of the Bands at Mohegan Sun in 2011. Their band was quite popular at that time. In the year 2012 and 2013, the band released their original materials. After that, in 2014 the band released two singles which became a very popular song of them.

They were nationally recognized after competing in the reality television show “America’s Got Talent” in the year 2014. In the audition, they sang their original composed song “Coming Your Way” and got selected after all the judges voted “Yes” for them. They got eliminated after the “Judgement  Week”. Their own composed song that they sang in the audition became so much popular that it hit the iTunes Pop Singles Chart and reached to number 53 on the list and sold more than 10000 copies in two weeks of its broadcast in the television audition.

Nick Fradiani gave audition in the America’s biggest singing competition “American Idol”. This time he gave audition as a solo singer and sang Peter Gabriel’s “In Your Eyes”. Judges of the show were so much impressed by his voice and singing that he got selected for the next round. He kept on giving his best performances in the show and went in further rounds. On May 13, 2015, it was the grand finale of the show in which Nick was one of the finalists and at the end of the show, he was announced to be the winner of the show. After winning the show, Nick sang in numerous concerts and did tours.