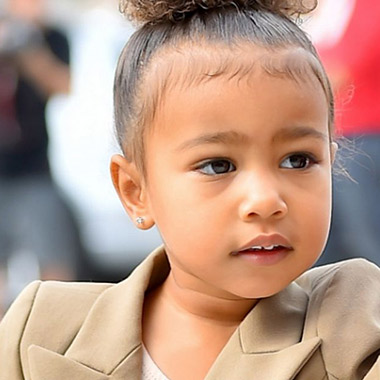 North West is probably the most famous celebrity baby in the world. Being the first baby of Rapper Kanye West and reality show star Kim Kardashian she was famous before she was born because the gossip had already started. Her name seemed to be humorous and topic to discuss. Many people think her name was an only rumor because of her father’s name.

North West has no middle name even it is traditional in the United States. Kim does not think she needs a middle name because North is too famous.

Kim and Kanye started dating in 2012 and tied the knot in 2014 in Florence, Italy. Kim is the main star of the reality show “Keeping Up With Kardashians”.

Kim was still married to Kris Humphries when she gave birth to North but they were separated. Kris Humphries is a Professional NBA basketball player.

North was born on June 15, 2013, in Los Angeles, California. It was Saturday morning and she came 5 weeks earlier than expected which was cover news for all media and topic of gossip. North was born in Cedars-Sinai Medical Center. North was nicknamed “Nori” by her parents.

North’s parents have net worth of $197 million combined. Kanye has $145 million of net worth and Kim ha $52.5 million. Kanye bought Christmas gift of about $74000 for North in 2014. The gift was diamond encrusted tiara and black toy SUV. She had already become the fashion icon for children.North is famous, rich kid, stylish and even lucky. She is not even five but she is already in designer clothes. Balmain fashion designer Olivier Rousteing gifted her khaki colored Jacket which cost about $8,000 which was specially made for her.

North always steals attention anywhere she goes. She doesn’t have the habit of throwing a temper tantrum. She is a totally cool child with mannersNorth’s mother Kim is pregnant with second child and there are rumors like the name of the baby will be as South or Easton but Kim has denied that. North told that she talks about having a boy sibling with her all the time and she never forgets to say good night to her baby brother inside her mother.

When North was born paparazzi did whatever they can do to get pictures of her because they knew it could be worth. She is all over the news where ever she goes and she is often seen on her mother’s reality show Keeping up with Kardashians.

Pictures of North West can be easily found in internets with Kim and Kanye West together. Any photo of North goes viral on the internet. Her hair style and dresses are famous all over the world.

You can find updates about her news regularly in the news and the internet. She is a child so she doesn’t have any Facebook or twitter account.