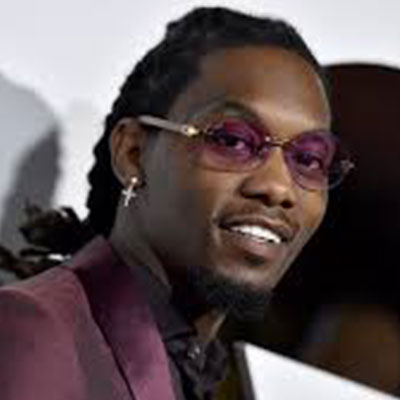 Kiari Kendrell Cephus popularly known as Offset is an American rapper, songwriter, and singer. He is a member of the famous hip-hop and trap trio, Migos along with his cousin Quavo and nephew Takeoff. Offset came into limelight after Migos’ song Versace became viral.

Offset is currently engaged to Belcalis Almanzar, popularly known as Cardi B. The two are expecting their first child together. Their relationship has not been perfect. There have been various cheating rumors. However, they are still together and going strong. The rapper himself does not have a clean record. To know more about Offset’s life, net worth, cars, house, girlfriend, children, pregnancy, couple, relationship, marriage, engagement, jewelry, salary, boyfriend, affairs, and career, keep scrolling.

Offset was born as Kiari Kendrell Cephus on 14 December 1991 in Lawrenceville, Georgia. He grew up alongside cousin Quavious Keyate Marshall (Quavo) and nephew Kirshnik Khari Ball (Takeoff) in Gwinnett County. Offset and Take off’s fathers left them when they were too young. Hence, they were raised by Quavo’s mother who was a hair stylist.

As Offset was growing up, he played football. However, due to a severe injury to his foot, he could not follow all his dreams. Furthermore, Offset attended Berkmar High School in Lilburn, Georgia and graduated in 2009. Regarding his nationality, he is Amercian. His ethnicity is black.

In 2009, Offset formed the trio with Quavo and Takeback.  The trio was named Polo Club but later it was changed to Migos. The trio released their single Versace in 2013 which went viral very quickly. It was produced by 300 Entertainment and Atlantic Records.

Apart from the work with Migos, Offset has released some solo tracks and also worked with other artists. He was featured on Metro Boomin’sisngle “No complaints“. He released a collaborative album with rapper, 21 Savage titled Without Warning on October 31, 2017. Aside from rapping, Offset along with Migos have also appeared in an episode of the series, Atlanta. Currently, he is working with Migos for their third studio album titled Culture II.

Offset came into controversy when he was arrested for violating his probation that he received for his past crimes like burglary and theft in Georgia’s Delkab County jail. Later on April 18, 2015, all the Migos members were arrested. However, Offset was denied bond and was kept in custody for possession of marijuana and firearm in a school safety zone for eight months due to his past records.

Furthermore, Offset was arrested for driving with a suspended license in 2016 but was released the next day. Offset has faced ups and downs in terms of legal issues. He does not have a squeaky clean record.

Currently, Offset is engaged to his girlfriend Cardi B. The two first met at a music industry event in 2016. They then released a track named Lick for Cardi’s Gangsta Bitch Vol. 2 projects. Later, the couple was seen together in a Superbowl game. However, they did not confirm their relationship until Valentine’s Day.

It was on October 29, 2017, when the two decided to take their relationship to next level. Offset lovingly got on his knees during Power 99’s Powerhouse concert in Philadelphia and proposed to the surprised Cardi B with an 8-carat pear-shaped diamond ring in front of fans. It was a beautiful moment and without a doubt, Cardi accepted his proposal. The two are very supportive of each other and have a loving relationship.

However, the couple is far from perfect. There have been separation rumors. The most significant was when Offset’s cheating video was leaked in December 2017. However, Cardi B did not break up with Offset giving him one more chance. Offset later got a tattoo of Cardi B’s name on his neck.

In recent events, Cardi B announced that she is pregnant with Offset’s child on April 8, 2018, through a performance in SNL where she flaunted her baby bump. Furthermore, Offset is the father of three children from his previous relationships. He has two sons namely Jordan and Kody, and a daughter named Kalea Marie.

Offset has an estimated net worth of $9 million. He was able to earn this huge amount through his music. He has also featured in campaigns for Bryce Barnes and Levati.  Offset spends a lot on his lady love as he gave her a $500,000 engagement ring. Before he also gifted Cardi a $60k chain that features a diamond encrusted hand with rings on it.

Offset owns a gated mansion in Atlanta that is spread over two acres of land. He has over a $1.27 million worth jewelry. He has a collection of cars from brands like Lamborghini Murcielago, Gallardo, Ferrari, Bentley. He was gifted a $400,000 Rolls Royce by his fiance Cari B for his birthday in 2017.

Offset is still very active in his career. So far he has made a fortune from his music records. We can expect his net worth to increase even more in coming days as he puts out new music.