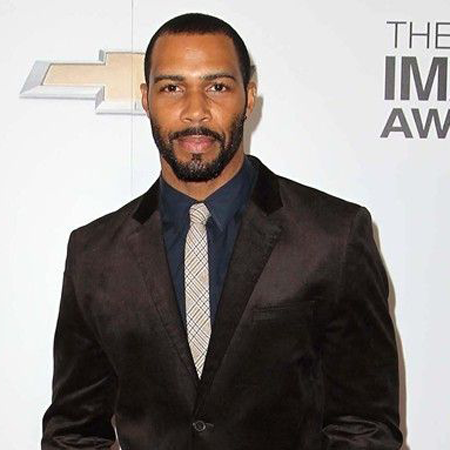 Omari Hardwick is an American actor better known for his roles in the television series like The A-Team, Saved and Dark Blue. Hardwick is active in the field of acting since 2001 and has also starred in numerous movies.

Omari Hardwick dated Joy Bryant but separated after a year and then he started dating Jennifer Pfautch. The couple dated for few months and tied the knot. They welcomed a son Brave and a daughter Nova.

Omari Hardwick was born on 9th January 1974, in Savannah, Georgia, United States. He is the son of father Attorney Clifford Hardwick IV and mother Joyce Hardwick. He grew up along with his three siblings Jamil Hardwick, Shani Hardwick and Malik Hardwick in Decatur, Georgia.

During his school days, Hardwick wrote several poems and also participated in several sports. He attended the Marist High School in Atlanta, Georgia and further played baseball, basketball, and football. Omari also received a football scholarship from the University of Georgia where he minored in theater.

As Hardwick could not earn selection for the NFL draft after completing graduation, he decided to pursue his career in acting. Initially, he did several odd jobs to pay for the acting classes and also slept in his car.

His hard work and dedication led him to make an appearance in the movies like Circles and Within the Wall.

However, Hardwick breakthrough came after appearing in the 2004 television series Sucker Free City as Dante Ponce. Afterward, Hardwick was selected for a role in the movie The Guardian and then eventually appeared in the series of Saved.

Likewise, in 2002, Hardwick appeared in the music video of Floetry‘s “Say Yes” and further participated in the National Poetry Slam in 2003 and 2004. Besides acting career, Hardwick in a collaboration founded the “Plan B Inc. Theater Group” and “Actor’s Lounge” at the Los Angeles’ Greenway Theater in 2010. He further founded the production company “Bravelife Films”.

Hardwick is actively working in the field of acting. Shot Caller and The Runner are some of his recent movies and will be appearing in the movies like Sorry to Bother You and Will Gardner. Moreover, he also appears in the role of James “Ghost” St. Patrick in the television series Power since 2014.

Regarding his personal life, Omari Hardwick is a married guy. Before marriage, Hardwick dated Joy Bryant but separated after a year and then he started dating Jennifer Pfautch.

After dating for a couple of months, the couple decided to take their relationship to the next step and finally tied a knot in 2012. The couple together has a son Brave and a daughter Nova. The couple has successfully maintained healthy relationships and hasn’t been the part of controversy regarding their divorce.

A renowned actor Omari Hardwick receives a reasonable salary from his acting career. He has appeared in numerous movies including The Guardian and also in television series like Breakout Kings through which he earns a good sum of money.

Moreover, Hardwick also obtains a good sum of money from his ventures. He is the co-owner of theater and production companies which is running well through which he earns a good sum of money. Allocating information from several sources as of 2018, it is found out that his current estimated net worth is around $1.5 million.