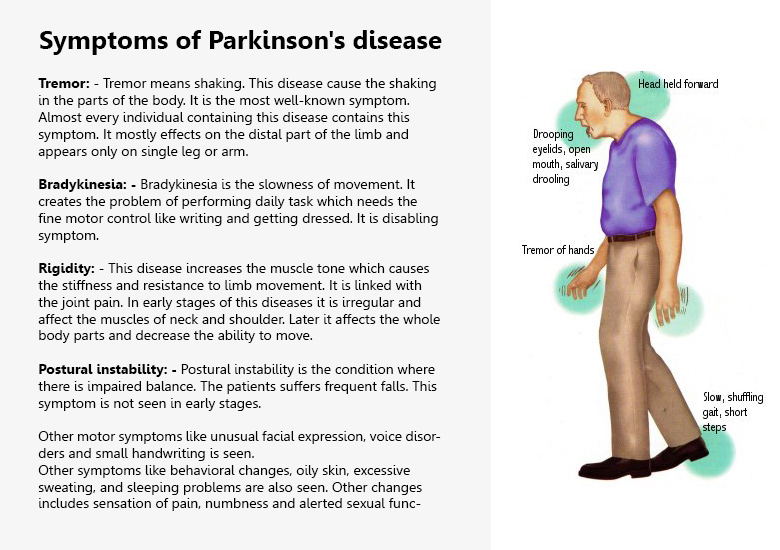 Parkinson’s disease (PD) is the disorder of central nervous system. It is also known as Idiopathic or primary Parkinsonism. This disease starts from the death of dopamine generating cells in the substantia nigra which is a region of midbrain. But the cause of the death of this cell is still unknown. The early symptoms of this disease are related to the movement of body. In the early stages this disease may slow down your movement. The shaking and rigidity of body also occurs in early stage. And later this disease cause behavioral problem and depression is very common for the patients. It also causes sensory and emotional problems. This disease is more common in elderly people after the age of 50.
In the early symptoms of the disease modern treatments can be effective. In the early stage the use of Levodopa and dopamine agonists can be effective. But as the disease progress and the dopamine generating cells continue to get lost the treating become ineffective.
English Doctor James Parkinson published the description in a detail manner in An Essay on the Shaking Palsy in 1817. The disease is named after him. This disease affects human as well as other primates.
After Alzheimer it is the second largest neuro generative epidemiology in the world affecting more than six million people around world.

This disease mainly affects movements of body by producing motor symptoms. The motor symptoms of are:-
Tremor: – Tremor means shaking. This disease cause the shaking in the parts of the body. It is the most well-known symptom. Almost every individual containing this disease contains this symptom. It mostly effects on the distal part of the limb and appears only on single leg or arm.

Bradykinesia: – Bradykinesia is the slowness of movement. It creates the problem of performing daily task which needs the fine motor control like writing and getting dressed. It is disabling symptom.

Rigidity: – This disease increases the muscle tone which causes the stiffness and resistance to limb movement. It is linked with the joint pain. In early stages of this diseases it is irregular and affect the muscles of neck and shoulder. Later it affects the whole body parts and decrease the ability to move.

The exact or specific cause of parkinson’s disease  is not known but some factors have been associated. Factors like head injuries and pesticides exposure and heavy metal exposure are the risk factors. However they are not the exact cause.
This disease is non-genetic disorder.

The consumption of caffeine is protective against PD which reduces the risk. Tobacco consuming also reduce the risk of PD but affect the quality of life.
Vitamin c and D are helpful to protect against this disease.

This disease has no cure but medication, surgery and exercises are helpful to get free from the symptoms. The treatment done for Parkinson’s disease are: –
Levodopa: – Levodopa is widely used treatment for this disease. The motor symptoms in body is due to lack of dopamine. Dopa decarboxylase converts the levodopa into dopamine in dopaminergic neurons and diminish the motor symptoms temporarily.
But the overuse of levodopa causes side effects like joint stiffness and nausea. Dopa decarboxylase inhibitors are given with the combination of levodopa to reduce the side effects. Benserazide and Carbidopa are dopa decarboxylase inhibitors.

Dopamine agonists: – Dopamine agonist like bromocriptine, pergolide, lisuride, apomorphine, piribedil, cabergoline, ropinirole and pramipexole bind to dopaminergic post-synaptic receptors to the brain. Dopamine agonists work like levodopa. It helps in reducing motor syndrome.
The treatment with dopamine agonists is very useful but it has also side effects like Insomnia, constipation, nausea and hallucinations. This treatment is expensive than levodopa but very effective. Dopamine agonists are suggested for earlier treatment.

MAO-B inhibitors: – Selegiline and rasagiline are the MAO-B inhibitors which increase the level of dopamine. It is useful in improving the motor syndrome. This treatment is less effective than levodopa and have more adverse side effects.

Other drugs: – Anticholinergic and amantadine are other drugs which can be useful for treatment.
But these drugs are not suggested for quality treatment.

Surgery: – There has been an advanced improvements of surgical techniques than before. Surgery is required for the patients for whom the drug therapy is not effective.

Rehabilitation: – The speech and mobility problems can be reduced with rehabilitation and physical exercise. Physical exercise can improve strength, flexibility and quality of life. Breathing exercises are important for chest wall mobility.