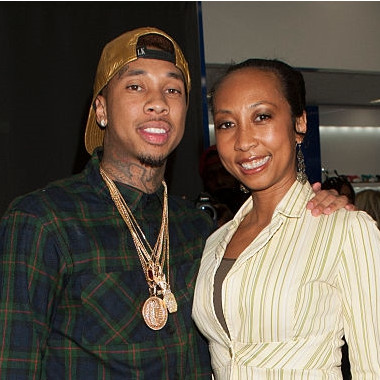 The 48-year-old, Pasionaye Nguyen is well known for being the mother of the famous rapper, Tyga (Michael Ray Nguyen-Stevenson). Further, he is a Grammy Award-winning rapper for “Deuces,” which he performed with Chris Brown and Kevin McCall in 2010.

As of now Pasionaye’s son, Micheal Ray Stevenson (Tyga) has an estimated net worth of $3 million. Currently, she lives with her son and family in California.

Pasionaye Nguyen net worth, salary, and earnings in 2019!

As Pasionaye Nguyen is not a celebrity, her current net worth and salary is under review yet. However, her son Tyga’s net worth in 2019 is estimated to be around $3 million.

Not much is known about Nguyen’s incomes and properties. But did you know in 2012, a video of Tyga saying he grew up in a rich home in the valley leaked online? He said that his mother even owned a Range Rover.

You may like: Tyga’s former girlfriend Kylie Jenner Bio!

However, it was later revealed that Tyga was just being satirical in the video. Confirming this, Tyga tweeted a message saying;

“When u 14 and ambitious u don’t give a f**k about anything. Scripted tv isn’t that what we all live for. Hahahaha”

Tyga’s claims about his mother, Nguyen owning a Range Rover made Tyga’s fans wonder what her profession was and what her net worth could be. However, none of such information is available to the media.

For the information, Nguyen’s son Tyga possesses several luxurious cars such as Mercedes, Bugatti Veyron, and Maybach. In addition, he enjoys his lavish lifestyle.

As per reports, it is said that Nguyen’s husband lived a rough life and had several run-ins with the law which saw him spend most of his time behind bars, away from his family.

Nguyen raised her son, Tyga in Compton until he was 11-12. Later, she shifted to Gardena, California, along with her son. In addition, she is responsible for her son’s stage name and nickname, Tiger Woods. She used to call him Tiger because Tiger is of mixed ancestry (Asian, African American, Native American, and Dutch).

Pasionaye Nguyen was born in 1973 in the United States of America. She is of Afro-Asian background, of Vietnamese ancestry. She holds an American nationality. Pasionaye is the elder sister of Cece Nguyen.

Her mother, Kim Nguyen is a Vietnamese lady, who lives in a modest apartment in a suburb of Los Angeles. According to Cece Nguyen, Kim does not speak English very well. The family resides in the state of California.

According to some sources, her husband had a bad reputation around Compton. He had multiple charges (including possession and gun) and was going in and out of prison, and often abused her. She could not do much about it, but later they separated.

Stevenson senior started serving a life sentence in March 1991. 25 years later, in March 2016 her husband sent a letter to her son, Michael, who published it on Twitter (T-Raww). The 25 years of incarceration have changed Tyga’s biological father, according to his letter from jail. Now he regrets not being there with his family but he revealed that he has discovered his spiritual self in prison.

She attracted the media because of her famous son, Tyga and his relationships. When she was seen supporting her son Tyga when he was allegedly involved in a love relation with Kylie Jenner. That time she said that as long as her son is happy she is happy.

Tyga was 24 years of age and Kylie was 17 years old at that time. His relationship with Kylie became a hot topic in celebrity news. His grandmother, Kim Nguyen approved of the relationship, dismissed the age gap, and revealed that they love cooking for Kylie when they visit the couple at their home and that Kylie likes their Vietnamese cooking.

She is the grandmother of King Cairo Stevenson, who was born on 16th October 2012. Her son and Blac met on 5th October 2011, at The F.A.M.E Tour in Miami. Blac became his leading lady in his music video, “Rack City”. On 9th November 2011, they became an official couple and posed for the cover of Urban Ink magazine in March 2012.