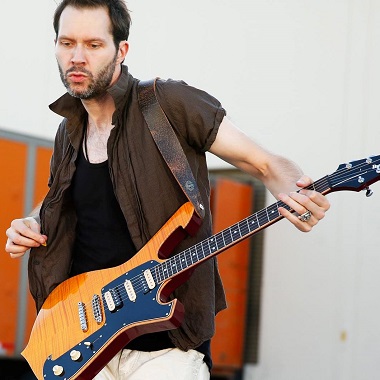 Paul Gilbert is best known as an American hard rock guitarist. He is widely recognized as a music composer in pop, rock, metal, blues, and funk.

At the age five, he learned to play music.  At the age 15, he began associating with touring clubs with his band Tau Zero. He was featured in Guitar Player Magazine along with Yngwie Johan Malmsteen.  He joined Guitar Institute of Technology to pursue his career as a lead guitarist.

Paul Gilbert started his early career at the age of 15. He made a  with metal megastar- Ozzy Osbourne. The founder pf Shrapnel Records, Mike Varney, was amazed after listening to the advanced alternate picking technique and record-breaking speed of Paul.  In 1985, he worked as GIT instructor and served in Racer X’s debut album “Sreet Lethal.”

Racer X was formed in Los Angeles, where he was a lead guitarist, Juan Alderete as Bass Guitar, Harry Gschoesser as a drummer and Jeff Martin asVocalist. Gilbert became one of the fastest guitarist possessing incredible technical pieces such as,”Technical Difficulties,” Frenzy,” “Scarified,” “Y.R. O.” and “Scit Scat Wah.”

In 1988, Gilbert co- founded Mr. Big with Bass Guitarist, Billy Sheehan including Pat Torpey on drums and Eric Martins on Vocals. This band became popular in Japan and also received international stardom after second studio album “Lean Into It” release. The featured acoustic ballad “To be with you” hit the number1 position on the Billboard Hot 100 and also got strong play at the radio station and MTV.

In 1996, Gilbert began his solo career after Mr. Big broke up. However, Mr. Big was reformed, and he did his record contract. Again, the band was disbanded in 2002. Then, he reunited the original members in 2009 and recorded new album produced by Kevin Shirley.

On June 30, 2010, he released the album Fuzz Universe, in America, Japan, and Europe, which was his third instrumental solo album. He also featured a cover version of Johny Cash’s “; Leave that Junk alone” in Japanese bonus track.

He has written his section, British Guitar magazine, Total Guitar, demonstrating guitar techniques. Before this, he also served as a contributor to instructional articles to Guitar Player Magazine in 1980 and 1990 series called “Terrifying Guitar 101”.

Paul is also a teacher at the Guitar Institute of Technology and also an honorary dean of the GIT division in Japan. He also writes a column for Premier Guitar called “Shred Your Enthusiasm.” Also, he was a member of ArtistWorks Guitar Campus where he launched the Online Rock Guitar School in May 2012.

Paul also endorses Direct Sound extreme isolation headphones, EX-29 model. He has posted a list of recommendation to prevent from tinnitus, problem-related to the perception of noise or ringing to ears and even hearing loss.

Moreover, he has poured his entire knowledge of playing guitar into a comprehensive video library, which includes 100 of incredible rock guitar lesson. He hs also been a tutorial for an online guitar lesson.

Gilbert has married twice. In 1993, he got married to Patricia Gilbert, the British actress.They remained together for six years and divorced in 1998. They are not parents to any children. 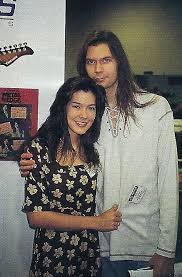 After seven years of separation from his first wife, he again married to Emi Gilbert, Japanese musician in 2005.  Emi Gilbert is piano and keyboard music expert.Since the pair were in the profession, they have stayed supportive to each other personally and professionally. 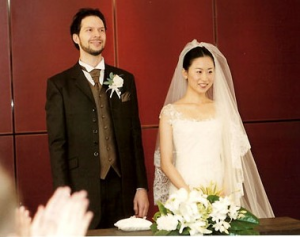 Moreover, Emi Gilbert joined a musical tour of husband, Gilbert several times. Both of them are a fantastic artist who has maintained their married life. The couple is blessed with a son, Marlon Kazan(born on 24 August 2014). The duo is happily married for 12 years and resides together with a son in Portland, Oregon.

As an established singer and guitarist, he earns an attractive salary. He released 14 solo albums from which his income is increased.

At present, he resides in Los Angeles and lives a lavish life. He is a successful artist and has a net worth of $ 4 million as of 2017 net worth estimation.