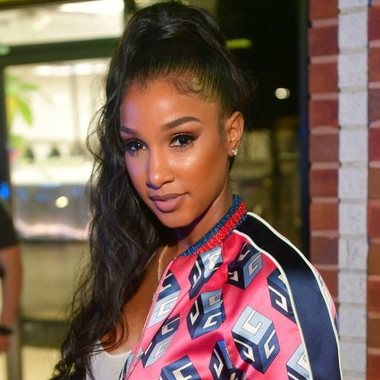 Bernice Burgos is an Instagram model, fashion enthusiast, and entrepreneur. Further, the gorgeous has starred in quite a few music videos by J Cole and Rick Ross and participated in high-profile fashion shows. Also, she has featured in a popular MTV show ‘Wild ‘N Out’ as well as expected to star in a reality TV series titled, ‘Gold Diggers’.

No newcomer to controversy, Burgos has regularly hit the celebrity gossip circuit headlines with her fiery affairs and for infamously hitting a minor girl. What’s more, she is proud mom to her daughters Ashley Burgos and Amarie Burgos. As of 2019, her net worth is $1.1 million.

Bernice Burgos is active in both of the entertainment industry and fashion product line. No doubt, it surely raises the bar for Burgos’ net worth. According to the source, she earns $500 thousand per annum from her modeling career.

After starring in MTV’s series called “Wild ‘n Out”, her appearances in the show increased enormously not only her popularity but also her net worth. Furthermore, she owns a sleepwear label, ‘Bold & Beautiful’.

As of 2019, her net worth is estimated at $1.1 million. She currently resides in New York, the United States where she owns an apartment. Additionally, her car list is quite impressive which includes: Bentley Continental GT, Mercedes G wagon, and Range Rover sports.

Along with her modeling career, Bernice Burgos is also popular for her loves and hookups. Currently, she is neither married nor single. She is involved in a romantic love affair with Meek Mill, an American hip hop recording artist from Philadelphia, Pennsylvania. The duo started dating in June 2018.

Furthermore, Burgos was previously linked with Canadian rapper, Drake in 2012. She knew him for over sixteen months before they were seen together in Australia. After the couple was seen together, rumors about their affairs were all over the media. Although the relationship did not get official and ended in 2015.

In 2016, Bernice Burgos was rumored to be dating a married man, rapper, T.I. The couple was reportedly spotted together in several cities including Las Vegas and Atlanta. Photos of the King of the South and Burgos have been circulating the web and has been sticking together at countless restaurants and nightclubs.

Bernice responded to rumors of her breaking up T.I.‘s marriage after Tiny pointed to her as a “pass around bitch” on Instagram.

“That home had BEEN broken,” Burgos wrote in the comments of the post. “And I’ve NEVER dealt with a married man in my life… Technically when a person files for divorce It’s saying they’re moving on with their lives & their marriage has failed… NEVER have I ever been passed around.”

Burgos also touched on her relationship with T.I. in a series of videos posted online. While Burgos claimed that she and T.I. are just friends, she seemed to intimate that they had sex. “This is 2017,” she said.

“Ain’t nobody gonna is waiting for pussy and waiting to fuck just because I’m getting separated. That’s not true. Ain’t nobody breaking no happy home. Ain’t no none of that. That’s none of my business. I’m there for him. He’s a boss, and I’m a boss.”

Burgos stoppered off her videos by declaring that she would never be a side chick. It is unclear when her relationship with T.I. started, but by her criteria, it had to have been after Tiny filed for divorce. Tiny’s disappointment with Burgos may come from her desire to reunite with T. I.

According to the source, T.I. reportedly decided he was done hiding his relationship with alleged side chick Bernice Burgos. TIP publicly show-off his new girl in town, Burgos on Meek [Mill] 30th birthday party in May 2017, Hollywoodlife wrote. The insider said, “T.I. received divorce papers from Tiny, on April 24.” However, the rapper has entirely moved on.

Moreover, there are two other men in her dating list. Migos rapper Quavo and Bernice Burgos dated from December 2017 to May 2018. Similarly, she was in a relationship with Trey Songz from September 2013 to January 2014.

Apart from her love life, she is also popular for doing plastic surgery however she has not confirmed yet by her, but her difference in appearance looks like she has done some plastic job.

According to New Jersey Newsroom, Bernice was arrested for allegedly striking a child in 2010. She was charged with one count of endangering the welfare of a child, a second-degree crime.

At the young age of 15, Bernice Burgos had her first daughter, Ashley. Though she never got married to Ashley’s dad, who is 19-year old spending time in jail, for some time she lived in his mother’s home because her own grandmother had kicked her out.

Furthermore, she has a second child, Sarai; however, the identity of the father is not known.

Bernice Burgos began her career working as a bartender and waitress, at the same time, she joined modeling. Burgos starred in music videos and also starred in MTV’s Wild ‘n’ Out. She has performed in several music videos and men’s magazine covers in the early 2000s.

Burgos has even walked the runway. Even after she got popular worldwide, she continued to work as a bartender for a while. She has appeared in the music videos such as J-Cole’s ‘Work Out,’ Hal Linton’s ‘Southern Hospitality’ and Jaheim’s ‘Ain’t Leaving Without You.‘

Bernice also has appeared Rick Ross‘s ‘Diced Pineapples’ video, featuring Drake and Wale. In addition to that, she has also appeared in different print publications which include Show Magazine, KING Magazine, XXL Eye Candy, The Source, SHOW Black Lingerie and video shoots with the Black Men Magazine and the Hot New Hip Hop.

Bernice is currently working her own line of lingerie under the brand “Bold & Beautiful,” where she sells sleepwear invented for women of all shapes and sizes. Her followers double tap her butt pics all day.

Burgos was born on 17th April 1980, to Puerto Rican descent parents in the Bronx, New York City, New York, United States. She has not mentioned her father and mother’s name on any social sites.

Burgos grew up in the tri-state area, between New Jersey and New York City. She holds an America nationality and belongs to African-American ethnicity.