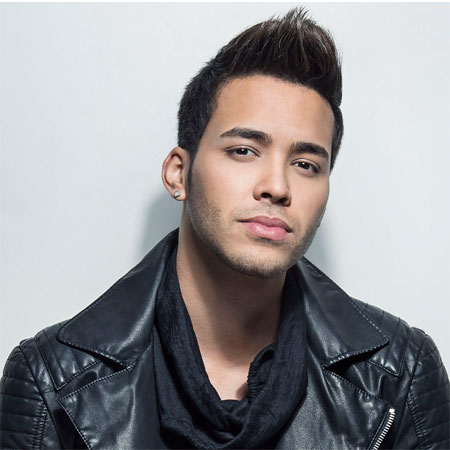 Prince Royce is an American singer and songwriter, well-known for his song Stand by Me and Corazon Sin Cara which peak number one position on the Billboard Tropical Songs chart and Me.

Prince and Emeraude Toubia were first seen on the streets of Miami in 2013 and later together in a red carpet. After dating for a long period, the couple got engaged in June 2017 and the wedding bells might be ringing for the adorable couples soon.

Prince was born on 11th May 1989 in The Bronx, New York. He was born as the second oldest child among four children to Ramond (a taxicab driver) and Angela, worked at a beauty salon and grew up along with his siblings.

Royce was interested in singing from his small age. While attending elementary school, he used to participated in several talent shows and used to write poetry. His poetry writing habit turned into songwriting eventually. After completing high school, Prince chose a singing career and didn’t go to University for higher education.

Prince released his eponymous debut studio album in 2010 where his singles Stand by Me, and Corazon Sin Cara peaked number one on the Billboard Tropical Songs and US Hot Latin Songs chart.

It includes singles Stuck on a Feeling featured by Snoop Dogg and Back It Up featured by Jennifer Lopez and Pitbull.

Prince has won the heart of millions of people by his fantastic singing talent, and a good look but there is someone who owns his heart. He might date several girls but hadn’t fallen in love as much as with Emeraude Toubia. She is a Canadian actress, listed as the Most Beautiful People by People en Espanol’s in 2017.

Prince and Emeraude Toubia started dating since a very long time. They were first seen on the streets of Miami in 2013 and later together in a red carpet.

After dating for a long period, the couple got engaged in June 2017 and the wedding bells might be ringing for the adorable couples soon. Prince gave her $100,000 diamond ring as an engagement ring.

Prince earns the excellent sum of money in his career. His several songs were successfully hit and sold over millions of copies through which helped him to earn a decent amount of money.

He has traveled in several tours around the world with several famous singers including Pitbull, Enrique, Ariana, etc. He has done concerts throughout the US including Radio City Music Hall, The Nokia Theater, and The Theater at Madison Square Garden.

Moreover, Prince Royce had also featured in several filmographies since 2013 through which he also makes a good sum of money. According to several sources, it is found out that Prince Royce’s net worth is around $5 million.