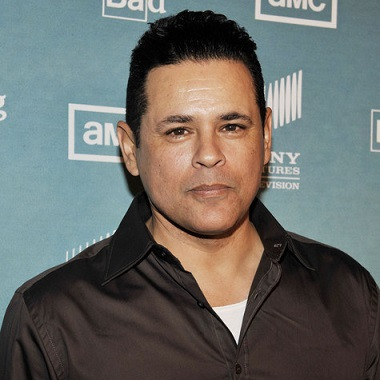 Raymond Cruz is a reputed American Actor, identified for his recurring role as a drug dealer “Tuco Salamanca” in AMC’s  groundbreaking show ‘Breaking Bad’ in 2008 and in ” The Closer”  as Detective Julio Sanchez. He has a keen interest in writing and theater. In fact, he is passionate about translating writing into performance.

Raymond, who belongs to Mexican Ancestry was born on July 9, 1961, in East Los Angeles, California, USA. He is a gentle guy, fascinated towards American Literature and knows both English and Spanish language. He studied at East Los Angeles College for higher education.

Mexican-American, Cruz interest on acting emerges when he went on a school trip to watch the inspirational classic movie “To Kill A Mocking Bird”. He thought of taking theater classes then after and joined the class in mid-twenties.

He loves building and riding motorcycle. In 2008, on an episode of “The Closer”, he used his own bike which reflects his love and passion for biking. Raymond has accepted the fact that it takes lots of time to socialize with people. He loves his own company rather encircling with crowds.

Raymond usually played the role of the soldier in most of his movie. In the gang film “Blood In Blood Out”, he played a role of the gang member as ‘Chuey’ from the Vatos Locos and in “Training day”  as  Sniper. He was critically acclaimed for his outstanding performance in the movie “Breaking Bad”. Later, he delivered his presence in for the first two episode of Breaking Bad spin- off, “Better Call Saul” which rose his fame among people. He has also been recognized from Dusk Till Dawn 2: Texas BloodMoney as Jesus.

Later, Raymond Cruz delivered his presence in for the first two episode of Breaking Bad spin- off, “Better Call Saul” which rose his fame among people. He has also been recognized from Dusk Till Dawn 2: Texas BloodMoney as Jesus.

Raymond has come up with 25 movies and 18 drama series. He has proved himself as versatile and enthusiast actor so far. He has received a Saturn Award nomination (2010) for his role as a violent drug dealer in ” Breaking Bad”. He also gained appreciation from the most challenging role in Blood In Blood Out (1994).

Raymond keeps his personal life away from media and social sites. He doesn’t want to reveal his love life and any other personal fact openly. It seems that he is the only career oriented, never been indulged in controversy and getting professional recognition only.

Some predicted that he is very close to male only and was assumed that he must be a gay once. But, in an interview with Mingle Media Tv, he discloses the fact that he is a married man. However, he didn’t mention whether he has children or not. But, he said he has a beautiful wife named Simi Cruz. Further this, there is no any factual information about his private life. 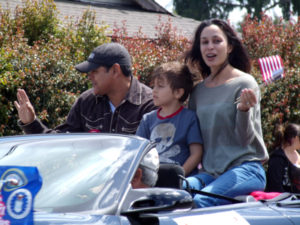 Actor Raymond Cruz and his family at the 2012 Strawberry Festival of Garden Grove parade
Source: AmericanJr

There is no doubt that Raymond Cruz is a wealthy man who has collect lots of money from Tv series and movies and also possesses assets like house, bike, and other branded material. His lifestyle is beyond imaginary of common people. He owned 1972 Moto Guzi El Dorado Police bike also.  Ultimately, Raymond Cruz net worth is estimated to be $2 million.Thus, he is ranked as one of the richest celebrities in America.