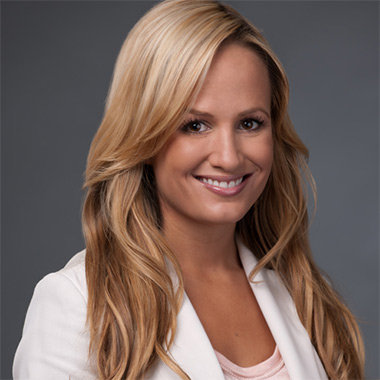 Rebecca Haarlow is a famous name as an American anchor and reporter who has been reporting for NFL Network for several years. She has also worked for Big Ten Network as a sideline reporter and previously she was associated with Fox Sports Net where she served as a sideline reporter. She is famous for her beautiful looks and bold personality. She is considered as one of the talented and versatile anchors with excellent communication skills. Haarlow has been in the industry for several years and has gained experience which made her a confident anchor.

Moving to her early life, Rebecca Haarlow was born on December 20, 1978, in Chicago, Illinois. She went to Hinsdale Central High School and completed her high school education. During her high school days, she won six Class AA state track and field medals and made her identity as an athlete. She was placed in eight positions in the 8—meter medley relay, 400 relays and was placed in the sixth position in the triple jump in 1996. With her performance, she grabbed the attention of many towards in her school days and was one of the successful athletes of her school. Similarly, in the 100 high hurdles, she was placed in the second position, in the 300 low hurdles in fifth and in the triple jump in the sixth position in 1997. After completing her high school education, she joined Princeton University for further study. Having exceptionally sharp mind, Haarlow scored 4700 in the 1999 Ivy League Heptagonal Outdoor Championships which was the second highest mark in Princeton history and she was placed in a third place with the score.

Rebecca Haarlow was talented for her school days. She has a very sharp mind and she achieves success wherever she touches. This bold personality has been a source of inspiration for many who have been struggling hard to get a position in the field of anchoring. Talking about her career, she has experience of working with Silicon Valley Sports and Entertainment as the Public Relations. Later on, she became the sideline Reporter for the Portland Trail Blazers in 2007. She started her career on NFL Network after joining in 2011 as a news anchor. She also worked for the FOX Sports Network as a sideline reporter. On January 8, 2013, she started to work for NBC 5 in Chicago. She worked in NBC on a part-time basis. Currently, she has been serving MSG Network as a reporter for New York Knicks telecasts. She replaced Tina Cervasio on 6 September 2015 while joining MSG Network.

Talking about her personal life, Rebecca Haarlow kept it entirely private. She might have been followed by many men as she has very attractive looks and personality and she might have been dating someone but she has hidden it well from media. She looks sexy in a short skirt and she has a strong sense of fashion. Harlow has been earning good amount from her profession but there is no any authenticate source to reveal the exact figure of her net worth. To get more information on this hot anchor, she can follow on twitter, facebook, and Instagram.