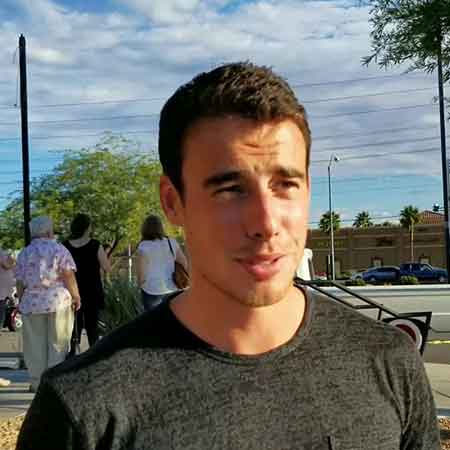 Reilly Smith is a professional ice hockey player who currently serves as the alternate captain for the Vegas Golden Knights of the National Hockey League. He plays in the position of right winger. Prior to Golden Knights, he played with the team Dallas Stars, Boston Bruins, and Florida Panthers. Smith has won NESN Boston Bruins 7th Player Awards.

Reilly Smith, alternate captain of Vegas Golden Knights is currently in the relationship with a beautiful woman, Caroline Lunny who is an American model. Prior to Lunny, he was in the relationship with Kayla Macaskill and Ali Nugent. Eventually, the couple separated. Let’s know all about the Reilly Smith and his personal life, career, married life, children, affairs, relationship, siblings, early life, education, salary, net worth and much more.

Reilly Liam Sheeran Smith better known by Reilly Smith was born on 1st April 1991, in Etobicoke, Ontario to Lester Smith, father, and Deidre Smith, mother. He has two brothers, Brendan Smith and Rory Smith. His brother Brendan is also professional ice-hockey player whereas Rory is a Lacrosse player. Regarding his nationality, Reilly is Canadian and is of white ethnicity.

Reilly Smith started his professional ice hockey career with Dallas Stars where he played three games. He then joined Boston Bruins and Florida Panthers subsequently. In 2017, Panthers traded Smith to the Vegas Golden Knights due to salary issues. Thenceforth, he has been playing with Knights. As of now, he has set the record of 87 points in the 162 games.

The 27 years old Ice-hockey player, Reilly Smith is currently in the relationship with an American model, Caroline Lunny. The couple started dating each other since Jan 2015.

Before Lunny, he was in the relationship with Kayla Macaskill and Ali Nugent. However, their relationship did not last for a longer time.

Currently, he is enjoying is a blissful moment with his girlfriend, Lunny. The couple seems to be very happy together. They have been dating each other for almost three years and still, they have maintained their relationship very strong with no rumors or news of other affairs. Neither any dispute has occurred between the couple.

Reilly Smith earns a decent sum of money from his Ice-Hockey career. In 2016, he signed $25 million contracts with Florida Panthers for five years. However, Panthers traded Reilly Smith at the 2017 NHL Expansion Draft to the Vegas Golden Knight.

Smith earns a good sum of money in his career and analyzing his career progress, he appears to be making money in thousands of dollars. Allocating information from several sources as of 2018, it is found out that his current estimated net worth is around $6 million. He is still active in his career and there is no doubt that his earning and net worth will increase in near future.

Reilly Smith has kept himself away from the social networking sites like Twitter and Instagram due to which it has made harder to know more about his daily activities including his cars collection and houses.