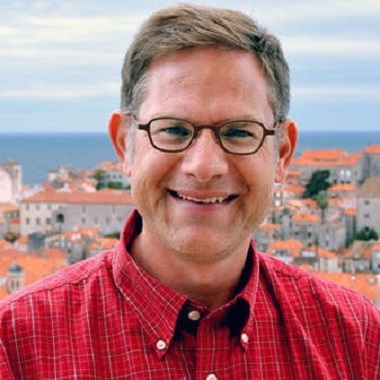 Richard “Rick” Steves was born on May 10, 1955, in Barstow, California,  USA.  Steve belong to Norwegian ancestry and is of white ethnicity. He was raised with a sister named Jan Steves, an Iditarod Racer.  Though he grew in America, his grandmother and grandfather used to live in Norway, and he used to visit them along with parents in his early age. He pursues further education at the University of Washington.

Rick Steves is involved in various professions and build his career as a travel guide, author, television personality, and syndicated newspaper columnist.

She initially worked as travel teacher in The Experiment College, non- credit classes at the University of Washington. During this time, he also serves as a tour guide. He runs his father’s piano store as a piano teacher in the initial phase of his career. He also released mobile application which contains audio contents of self-guided tours, named Rick Steves’ Audio Europe.

Rick Steves started his journey as an author since 1979.  He published his first edition of “Europe through the back door,” a  travel skill book, in 1980.  This book generally focused on guidelines to visit Europe. It includes step by step advice, based on traveling skill in Europe. He became an entrepreneur of “Rick Steves’ Europe through the back door,” established a store in Edmond, Washington, north of Seattle.Steve is also active in writing country guidebook, city and regional guides book, and co-authored Europe 101: History and Art for Travelers with Gene Openshaw

Rick Steve’s guide to Italy is one of the best-selling guidebooks in  America. Steve has encouraged his reader and viewer to visit new places, country and especially village area of the country. He wrote his favorite moments from his many years of travel in “Postcards from Europe.” His books are published by Avalon Travel Publishing, a member of the Perseus Books Group. Risk Steve has also published the book “Travel as a Political Act” in 2009.

Rick Steves debuted in the television show, “Travel in Europe with Rick Steves” in April 1991 whose production ended in 1998. Then after, his second show was “Rick Steve’s Europe” which was debuted in September 2000.  He was the host, writer, and producer of this series which is most long-running Oregan Public Broadcasting’s show.

Rick Steve is a member of Democratic Party and also was active during Presidential Campaign in 2016 in which he endorsed Hilary Clinton’s Campaign. Steves also serves on the Advisory  Board of the “National Organization for the Reform of Marijuana Laws.” According to him,” marijuana” is also soft drink like alcohol and tobacco and supports to legalize it in the United States. Likewise, he hosted an ( American Civil Liberties Union) ACLU- sponsored educational program broadcast, Marijuana: It’s Time for a Conversation.

In 2005, he constructed24-unit Apartment Complex in Lynwood, Washington, named Trinity Way administrated by Local Young Women Christian Association on behalf of all the homeless mothers and their children. Adding more, he raised funds for the hunger advocacy group “Bread For The World,” Christian citizen’s movement in the U.S. to end hunger. Moreover, In 2011, he provides the US $1 million to the Edmonds Center For The Arts and Cascade Symphony Orchestra in support of Arts.

Rick Steve established himself as a great citizen of United States and is very active in social service activity. He had made a contribution in various social activities.

Rick Steve, famous personality of travel show got married to Anne Steves. They have two children, a son, Andy Steves and a daughter Jackie Steves. They were happily married couple until 2010. The pair decided to separate, but the actual reason behind their separation is not clarified by Rick Steve. It is his personal issue that he doesn’t want to disclosed. 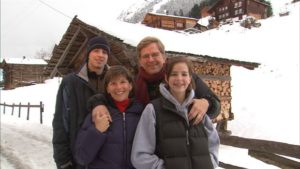 Rick Steve and his wife Anne Steve with their son, Andy, and daughter, Jackie.
Source: Frostsnow

After divorced with Anne Steve, he was rumored of dating a girl, Trish Feaster, who is younger than her by 20 years. They shared blogs where they mention that they are traveling together. 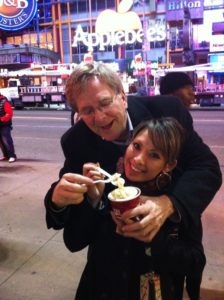 Rick Steve has the various source of income. He is the host of public television series “Rick Steve Europe” and public radio travel show “Travel with Rick Steve” from which he earns a lot. Similarly, his books based on travel and adventures are best selling books in the market all around the globe. So, it is evident that he earns in an excessive manner. It is estimated that his net worth is approximate $10 million.