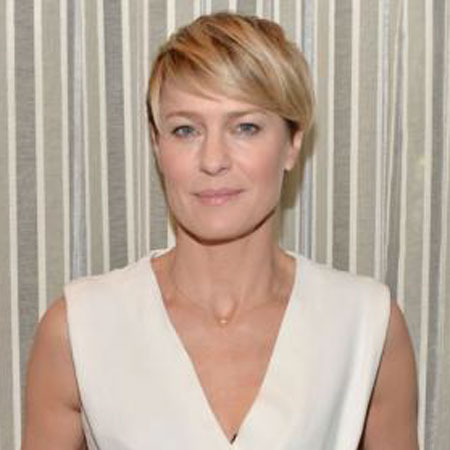 Robin Wright is an American actress and director. She nominated seven Primetime Emmy Award nomination and won Golden Globe Award as well as Satellite Award for her performance in TV series.

Robin was married to Dane Witherspoon, actor, in 1986. The couple met on the set of the tv series Santa Barbara in 1986 and began dating. After two years of marital relationship, the couple ended their relationship and finalized their divorce in 1988.

Wright was born as Robin Gayle Wright on 8th April 1966 in Dallas, Texas. She was born to father, Freddie Wright, a pharmaceutical company employee, and mother, Gaston, a cosmetic saleswoman, and grew up along with her siblings.

Robin attended La Jolla High School and completed her high school graduation from the Taft High School in Woodlands Hills, Los Angeles. She wanted to pursue her career in an entertainment industry so, at the age of 14, she began a career as a model and eventually became an actress.

Robin started her career as a model and got a chance to feature in the NBC Daytime soap opera Santa Barbara, at the age of 18. Her performance in Santa Barbara grabbed her wide media attention and earned her Outstanding Heroine Daytime award.

Robin also featured in the hit movies such as Wonder Woman, Everest, The Congress, The Conspirator, Unbreakable, The Princess Bride, etc. Moreover, her performance in the Netflix political drama web tv series House of Cards won her the Golden Globe Award for Best Actress-Television Series Drama. She was the first actress to win a Golden Globe Award for a web television series.

Wright has been through Ups and Down in her personal life. Firstly, she married Dane Witherspoon, actor, in 1986. The couple met on the set of the tv series Santa Barbara in 1986 and began dating. After two years of marital relationship, the couple finalized their divorce in 1988.

Later, Robin started dating Sean Penn, actor, from 1989. The couple welcomes their first child, Dylan Frances, in 1991 and second child, Hopper Jack, in 1993. Robin and Sean married in 1996 but announced their divorce in 2009. The couple again announced reconcile but divorce on 22nd July 2010.

Afterward, Robin started dating Ben Foster, actor, in 2012. The couple engaged in January 2014 but called off in November 2014. They again reunited in January 2015 but again separated. Currently, Robin is single.

Robin earns the good sum of money in her career. As per Forbes, it was reported that she was paid $5.5 million for the show Spacey in 2015 and paid $6.5 million following year. Her earning from Wright’s highly-acclaimed appearance in Netflix’s House of cards in 2015 was $5,500,000 and $2,500,000 salary from the movie Unbreakable.

Robin featured in several hit movies which earned millions of dollar in the worldwide box office collection. According to different sources as per 2018, it was reported that her current net worth is around $60 million.