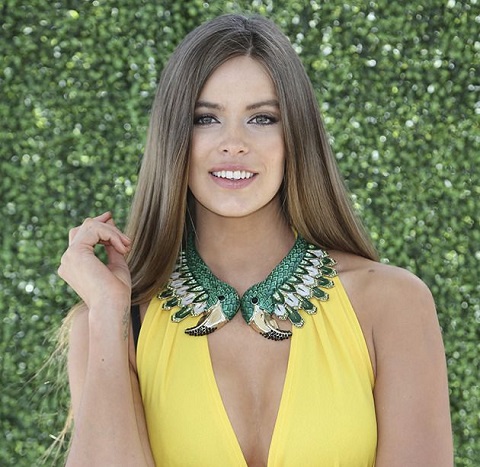 An Australian model Robyn Lawley is widely known for being the cover model of various magazines. Lawley is a Vogue Italia cover model and plus-size model for Elle France.

Lawley did her first magazine shoot in 2006 for Dolly. Lawley is currently dating her boyfriend Everest Schmidt who is a lawyer with the Paul Law Group. From their relationship, they have a daughter named Ripley Lawley Schmidt.

Robyn Lawley Net worth and Salary

From her modeling career, Robyn Lawley earns a good sum of money. Currently, Lawley has an estimated net worth of $500 thousand and earns an average annual salary of $100,000. Starting her modeling career in 2006, Lawley is still active in the same field.

So far, Lawley has done modeling for popular agencies including Elle France, Vogue Italia, Marie Claire and so on. Furthermore, Lawley also adds money by advertising new products on her Instagram. Besides her modeling career, Lawley is also the co-owner of Bond-Eye Swimwear from which she adds more money.

Lawley is living a lavish life with her partner and child. In November 2017, she bought her dream house in upstate New York. Furthermore, Lawley further owns luxurious cars. Lawley also owns a dog of Pit Bull Terrier breed which worth $500 – $700.

Robyn Lawley Relationship With Her Boyfriend

Robyn Lawley is currently in a relationship with her long-term boyfriend Everest Schmidt. Her partner Everest is a lawyer with the Paul Law Group. Moreover, he is a former Lafayette College basketball player.

Lawley met Everest for the first time at a bar in New York and began dating. From their relationship, the pair is blessed with a daughter named Ripley Lawley Schmidt born on 26th February 2015. She is one of the loving and caring mothers. Lawley often talks about her motherhood during interviews.

However, Lawley mentioned that she will not have any more children after being diagnosed with a rare autoimmune disease following Ripley’s birth. Lawley and her partner Everest are together for more than seven years.

Although the couple is together for long, they are not engaged or married yet. Lawley confessed that she’ll never get married in future. However, she strongly believes partnership and dedication towards each other will maintain a healthy relationship. Lawley frequently shares photos of her husband and daughter on her Instagram.

Robyn Lawley was born on 13 June 1989, in Girraween, New South Wales, Australia. Her parents are father Chris Lawley and mother Janne Lawley. She grew up along with her elder sisters Shona Lawley and Jennifer Lawley.

Lawley belongs to an Australian nationality. Her birth sign is Gemini. She attended Macarthur Girls High School. Since her early age, Lawley developed a passion for modeling.

In 2006, Robyn Lawley did her first magazine shoot for Dolly. Initially, she appeared in a plus-size clothing range for New Zealand brand EziBuy. Furthermore, Lawley also modeled for the covers of magazines including Elle, Cosmopolitan, and Marie Claire.

Along with models Tara Lynn and Candice Huffine, Lawley featured on the cover of Vogue Italia in June 2011. Moreover, she further did modeling for plus-size brands such as Lane Bryant, Ma

Likewise, in 2013, Lawley photographed for a fine art exhibition, Size Does Matter. On the other hand, she also did nude photography with animals like rabbit, octopus, owl, and so on. Besides her modeling career, Lawley is also the co-owner of swimwear line Bond-Eye Swimwear which she launched in August 2013.

Lawley even wrote two books for The Daily Beast which were published in 2012 and 2013 respectively. In 2011, Lawley won an Australian Cosmopolitan Fun, Fearless Female, Rising Star Award. The same year, she also won a Sydney Magazine’s Top 100 Most Influential People of the year award.