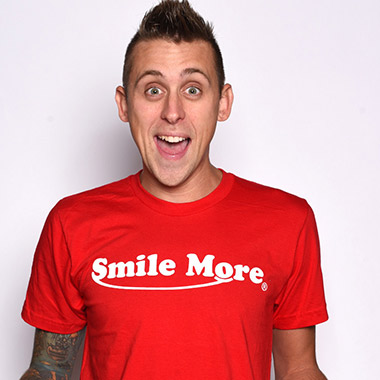 Roman Atwood is an American comedian, prankster, and vlogger. He is famous because of his hidden camera public prank videos on his YouTube account. With Howie and Alex Mandel he started filming a reality prank show. He also shot a movie Natural Born Pranksters with Zdorovetskiy and Roady and has made videos with other YouTube star as well.

Roman was born on May 28, 1983, in Cleveland, Ohio, United States. Since his high school days, he has been filming and producing videos. In 2006 he sold his series of DVDs called “The Nerd Herd” at the Warped Tour. Until 2010 he has worked on various commercials and film projects in Columbus, Ohio. He then decided to focus on his passion. He then created the YouTube channel “Sketch Empire”. He worked in his family’s rope factory “Atwood Rope” before his career as a YouTube prankster.

He pranked by rolling toilet paper on Howie Mandel’s mansion. Alex Mandel, son of Howie Mandel helped to roll the toilet paper while Howie Mandel was at the airport from New York. While his girlfriend was out, he filled his house with plastic balls 3ft high. Nissan noticed this video and gave him a 2015 Nissan GTR in exchange. During their half-time advert at Super Bowl XLIX, he wanted to use his video in the WithDad campaign. On November 20, 2013, he posted his “Anniversary Prank Backfires!!”. As of 2016, his video crossed over 84 million views. The video featured him pranking his girlfriend on their five year anniversary. He pranked by confessing that he cheated on her. The prank backfires as she pranks him back by pretending that she cheated on him too.

His girlfriend said “I thought you were going to propose” at the end of the video. On November 30, 2014, he posted a prank titled as “Killing My Own Kid PRANK!!”. His video crossed 48 million views as of the October 2016. The video shows him pranking his girlfriend Brittney by throwing a mannequin of his youngest 3-year-old son Kane over the balcony of their house. After the fall of a mannequin, his girlfriend quickly rushes downstairs and removes the mask worn by a mannequin. After removing the mask she finds out that it was just another of his pranks. She breaks down into tears because of the incident and Roman tries to comfort her in the room. Roman asks her “Are you really that mad?” then she starts shouting at him and orders him that he will be sleeping on the couch

On March 4, 2012, he posted a prank video titled “Cops Get Owned!!!- Epic Pee Prank”. As of 2016, the video crossed over 24 million views. The video also featured his friend Dennis Roady who pretends to urinate in front of police officers.
On May 29, 2012, he posted “Pee Prank” which got 9 million views as of October 2016. In this video Dennis dressed up as a woman and pretends to urinate in front of cops. On April 14, 2013, he posted prank video titled “Attacked By Ferrari Owner- Pee Prank”. The video crossed over 24 million views as of February 2015.

He has also opened an online store which he operates in his basement in Ohio called as The Smile More Store. He sells hoodies, t-shirts, and other various other items which are labeled with his famous slogan “Smile More”. As of 2016, Roman Atwood’s net worth is around  $3.5 million dollars.