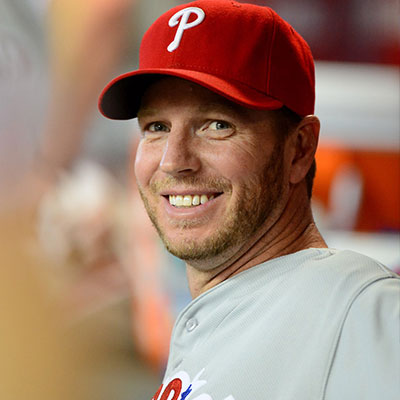 Roy Halladay was an American professional baseball player who played in the Major League Baseball for the Philadelphia Phillies and Toronto Blue Jays. He was also best known by his nickname, Doc which was coined by Toronto Blue Jays announcer, Tom Cheek. Besides, Halladay was two times Cy Young Award and two times MLB leader winner.

Harry Leroy Halladay III was born on 14th May 1977, in Denver, Colorado to Harry Halladay Jr. father and Linda Halladay, mother. His father was a pilot for a food processing company whereas his mother was a homemaker. He had two siblings both sisters, Heather Halladay Basile and Merinda Halladay.

Roy Halladay had an interest in Baseball since his young age. He began training with a baseball guru, Bus Campbell at the age of 13 who helped him to sign with Toronto Blue Jays of the Major League Baseball. He attended the Arvada West High School and graduated from there in 1995.

Roy Halladay made his professional MLB debut in 1998 with the Toronto Blue Jays. He played with the team for almost 11 years and was traded to Philadelphia Phillies in exchange for Kyle Drabek, Travis D’Arnaud, and Michael Taylor. He announced his retirement in 2013 after playing almost three seasons with Philadelphia due to injury.

The baseball Star, Roy Halladay was married to Brandy Gates on 27th November 1998. The husband and wife were blessed with two sons Ryan and Branden Halladay.

Roy Halladay died on 7th November 2017, after his ICON A5 Founders Edition amphibious aircraft crashed into the Gulf of Mexico. Reportedly the crash happened about 0.25 mi off the coast of New Port Richey, Florida. Philadelphia Phillies suspended number 34 for the 2018 seasons to honor Halladay.

Roy Halladay has accumulated a huge amount of money from his baseball professions. Analyzing his past works, he received almost $20 million per year while playing for the Philadelphia Phillies. Likewise, as an eight-time MLB-All star, he also boosted his net worth.

Allocating information from several sources it is found out that his net worth as of 2018, is estimated around $70 million.

He used to own a vintage car called 1932 Ford Hartford which is most rear cars in the world. Likewise, he used to reside in a huge mansion in Newtown Square, PA which he bought for more than $2 million.