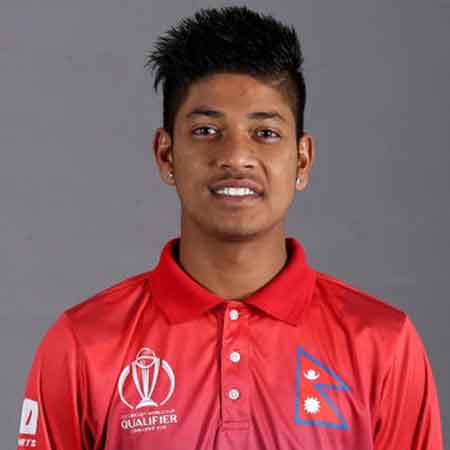 Sandeep Lamichanne is one of the pre-eminent Nepalese cricketers who currently plays for the Nepal national team as a right-handed leg spin bowler and batsman. Besides, he is widely recognized for being the first Nepalese cricketer to get a contract to play in Indian Premier League.

Well in today’s session, we will be revealing detail about this talented cricketer’s personal life as well as early life, career, salary, awards, achievement, relationship, nationality, ethnicity, mother, father, siblings, net worth and much more. Stay with us.

Sandeep Lamichanne was born on August 2, 2000, in Syangja, Nepal, to Chander Narayan Lamichanne, father, and Kopila Devi, mother. He grew up with two siblings a brother, Mohan Lamichanne, and sister, Indu Lamichanne. He considered Shane Warne and Sachin Tendulkar as his cricketing idols. Regarding his nationality, Lamichanne is Nepalese and is of mixed descent.

Sandip Lamichanne began playing cricket since his early age. He made his cricket career debut in the 2015-2017 ICC World Cricket League Championship against Namibia on April 16, 2016. Before that, he played for Nepal’s under-19 squad for the 2016 Under-19 Cricket World Cup.

During the match against Ireland U-19 team, he took a hat-trick in the 32nd over. Right after that, he became the fifth bowler to take a hat-trick in the under-19 world cup history. Not only that, he finished the tournament as a second highest wicket taker with 14 wickets.

Lamichhane’s career came to the hype after he received a letter from former Australian captain Michael Clarke inviting him to play for the Sydney-based Western Suburbs District Cricket Club.

More recently, Lamichanne was included in the list of players in the 2018 Indian Premier League where his base price is IC 20 Lakh. He became the first Nepalese Cricketer to get a contract and to play in the Indian Premier League. In May 2018, he made his T20 debut playing for the Delhi Daredevils. He took five wickets in three matches with 16.4 bowling average.

Indian Prime Minister, Narendra Modi praised Lamichanne for his amazing bowling ability hinting the relationship between Nepal and India have been maintained perfectly even via cricket. Now, he has been added to ICC Rest of the World XI, a team for the Twety20 International match against the West Indies.

Sandip Lamichhane currently seems to be living a single life. He has not shared much information about his love life. Besides, he seems to be concentrating on his cricket career rather than getting focus on his love life

Apart from his professional career, Sandeep is also active on social networking sites like Facebook, and Instagram. He has thousands of followers on it. He shares pictures of himself hanging out in different places and events.

Sandip Lamichhane makes a decent sum of money from his cricket career. More recently, he was paid IC 20 lakhs for his debut in Indian premier league. As of 2018, the exact figures of his net worth is under review, but seeing his growing success, his net worth sure to be in thousands of dollars in near future.