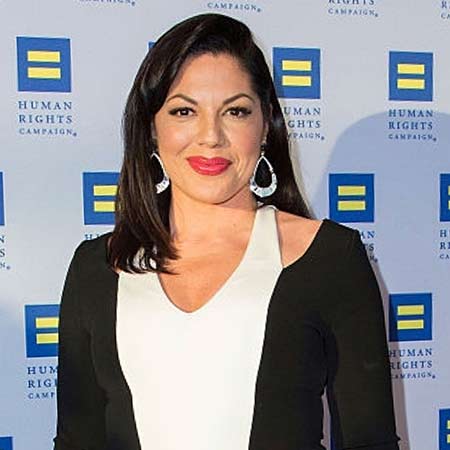 Sara Elena Ramirez, widely known for Sara Ramirez is a Mexican-American actress plus singer and songwriter. She is the winner of Tony Awards for her outstanding performance in Spamalot, based on 1975 movie, Monty Python, and the Holy Grail. She is also famous for her role Dr. Callie Torres in Grey’s Anatomy.

Sara introduced herself as a bisexual in one of the powerful LGBT Speech. Although she is a bisexual, she is in a romantic marital relationship with her husband, Ray DeBolt and does not share any children.

Born on 31st August 1975, Mazatlan, Sinaloa, to Mexican parents, Sara Ramirez was raised to single mother in the northwestern coast of the Pacific coast of Mexico. She belongs to Mexican-American Irish descent, and can is fluent in Spanish and English.

When she was 8, her parents divorced and she began to live with her mother and moved to Tierrasanta, San Diego, California. She then developed an interest in music and went to San Diego School of Creative and Performing Arts. She began taking part in acting and stage productions.

After she made her appearance in the play such as Into the Woods, Hello, Dolly!, and Annie, she was recommended in Juilliard School, New York City. There she earned Bachelor of Fine Arts and began working on her acting skills and trained alto singer.

This 42-years-old actress, Sara Ramirez made her acting debut from Paul Simon’s and Derek Walcott’s written musical play, The Capeman, in 1998. The musical play is based on the life of the Puerto Rican gangster Salvador Agron. Not only this, she voiced the character Lammy in one of the video game Um Jammer Lammy.

The same year, she got an opportunity to share the screen with Tom Hanks and Meg Ryan in Nora Ephron’s directed American romantic comedy-drama movie, You’ve Got Mail. It was one of the successful hit movies that earned the overall collection of $250.8 million all over the world.

In the year 1999, she gave an outstanding performance in Mark Lamo’s The Gershwins’ Fascinating Rhythm for which she received Outer Critics Circle Award nomination for her role.

One of her greatest success was to join Grey’s Anatomy where she has a recurring bisexual character of Dr. Calliope Torres, an American medical drama where they have done over 305 episode in 14 seasons.  Also, she received several nominations including Alma Award, Screen Actors Guild Award, 42nd NAACP Image Award and few others.

Other than acting, she has released a single, a rendition of Silent Night, in 2009 and four other songs including a cover of The Story, sung by American folk singer Brandi Carlile, in 2007.

Further, she is a social activist and has campaigned for LGBT rights. Later, she was awarded Ally for Equality Award by Human rights Campaign Foundation for supporting Bisexual Organizing Project, NDLIN, Mujerez De Maize and few others. She is also a member of True Colors Fund Board of Directors and The Task Force and The San Diego, New York.

Sara Ramirez is officially a bisexual which she revealed at the True Colors: 40 to Non-Summit, a two-way conversation that addresses LGBT youth homeless across the country, in Los Angeles, in 2016.

Though she is a bisexual, she tied the knot to Ryan Debolt in an intimate ceremony, in New York, on 4th July 2012. They engaged a year earlier in vacation, at Paris. There is strong bonding between these couples and spend quality time with each other.

Sara Ramirez Net Worth and Lifestyle

As of 2018, Sara Ramirez shares an estimated net worth of $6 million which she earned from her acting and singing profession. Ramirez might have collected such a huge amount of net worth through her singing and acting career.

In the same day, Ramirez’s husband Ryan Debolt’s net worth is estimated to be around $4.5 million. There is no doubt that Ramirez is living a lavish lifestyle.