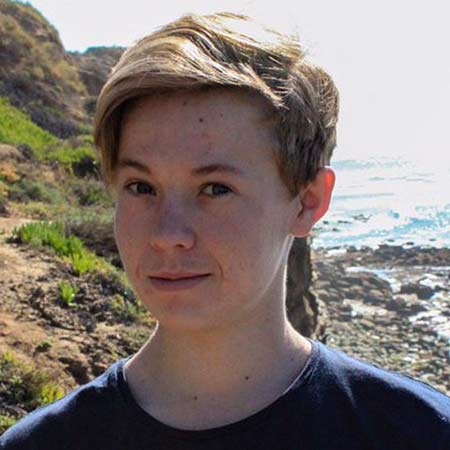 Tanner Fox is a young and talented Professional stunt scooter rider and social media sensational. Among few people who achieve success at a very young age is Tanner Fox. He rose to fame after he demonstrates his craft work for more than 6 million subscribers on his official YouTube channel.

Tanner is dating his girlfriend, Taylor Alesia, since 2017. The beautiful couple also has shared several photos together on their Instagram account.

Born on 22nd December 1999, Tanner Fox was raised by American parents in the city of San Diego, California. He has a sibling sister named, Lindsay Fox. He is an American and belongs to North American ethnicity. He owns a pet dog, Kirby Fox, which is also the part of his family.

From the same city, San Diego, he did his education and build skills in riding various motor vehicles, skydiving and messing around on trampolines.

This 18-years-old guy, Tanner Fox began his early career as a YouTuber. He found a great platform: YouTube channel to represent his talent throughout the world. Then he made his own YouTube channel named, MTfilms, in the year 2011 which was later one changed to Tanner Fox.

For the first time, he shared different stunt tricks videos with his skateboard, scooter rides, and so on. It is said that Fox was inspired by a famous rider, Dylan Morrison and began practicing like him.

In a very short period of time, Fox’s and his talent flourished in the internet world. Soon, the famous companies like Lucky Scooters, Root Industries, and the Grind Shop open their doors to Fox for endorsements and so on. He also gives his demo rides for them and is still involved in it.

Till date, Fox YouTube channel has over 6.8 million subscribers and the channel has over 500 million views all over the world. He often shares his creativity in his channel and received over 2 million viewers which estimated revenue is around $3000 per day with $1.1 million per year, isn’t it awesome?

Nowadays, he also shares several blogs and prank videos besides his stunt videos. One of his successful and famous video on YouTube channel is ‘BMX vs Scooter’ with Harry Main and also has collaborated with several other celebrities like Justin Stuart, Casey Neistat, and Carson Leuders.

Capricorn star, Tanner Fox is currently dating a YouTube star, Taylor Alesia since 2017. Taylor, 21, is also a social media sensational, popular on Instagram. Together, the beautiful couple has shared several photos cuddling, hugging and spending quality time with each other.

Well, he enjoys having coffee and is addicted to it so much. His favorite one is Starbucks’ tall, Vanilla Iced coffee with cream.

Allocating information from several sources as of 2018 it is found out that Tanner Fox current estimated net worth is around $3 million.