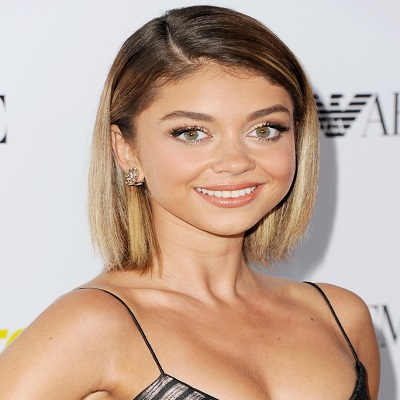 Sarah Hyland is a Screen Actors Guild awards winning American actress. She is well known for portraying as Haley Dunphy on the ABC sitcom, Modern Family. Moreover, she is famous for playing in the notable movies like Struck by Lighting, Vampire Academy, Scary Movie 5 and XOXO.

Sarah Jane Hyland was born in Manhattan, New York on November 24, 1990. She is a daughter of actor, Edward James Hyland and Melissa Canaday. She grew up with her sibling, Ian Hyland in New York. Sarah was homeschooled until 2nd class by her mother.

Later, she attended Professional Performing Arts School and graduated in 2008. Moreover, Sarah followed in her parent’s footsteps. She began in acting at the age of 4 with commercial work and voice-overs. Sarah did a multitude of film and television and, at the age of 11 1/2, she made her stage debut at Papermill Playhouse in Millburn, NJ in the title role of “Annie.”

From there, Sarah added much more stage productions to her resume including Bad Girls, Dark Part of the Forest and both productions on and off Broadway of Grey Gardens in the role of Jackie Bouvier. After completing education, she moved to Los Angeles to pursue a career in acting.

Sarah started her acting career playing Howard’s Daughter in 1997 in the movie, Private Parts. She followed this role with appearances in such films as, The Object of My Affection(1964), Cradle Will Rock (1999), and Joe Gould’s Secret (2000). Throughout the early 2000s, she proceeded to continue to her career, appearing in such films such as Spanglish and Cougars Inc.

Currently, she is portraying as Haley Dunphy in the American television mockumentary family sitcom, Modern Family. She has won consecutively Screen Actors Guild Award for Outstanding Performance by an Ensemble in a Comedy Series.

Sarah is unmarried till date, but she was in a relationship with an actor, Matt Prokop in 2009. The two reportedly met during High School Musical 3: Senior Year audition. From 2011 – 2014, they were in the living relationship, but the relationship did not work out and speared in late 2014. 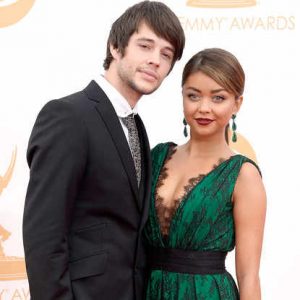 Moreover, she also dated to an actor, Max Ehrich in 2007 but the two ended their relationship a year later. Then, she began to date Dominic Sherwood in 2015, but in summer of 2017, they had split. Her current relationship status is currently single. 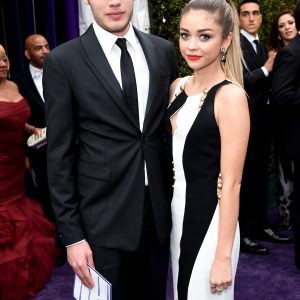 Sarah Hyland with her then, boyfriend Dominic Sherwood
Source:bustle.com

In 2010, Sarah was diagnosed with kidney dysplasia. After struggling with the disease for nearly 12 years, in 2012, she underwent kidney transplant surgery. Her father Edwards donated his kidney to her. She is better now but gets side-effects of the medicines she is forced to use for preventing the kidney transplant.

Sarah is a talented actress of the industry. Till date, Sarah has done numbers of stage acts, appeared in series and movies. As of now, Sarah’s estimated net worth is to be around $9 million. To know more about her you can follow her on social sites like Facebook, Twitter, and Instagram.