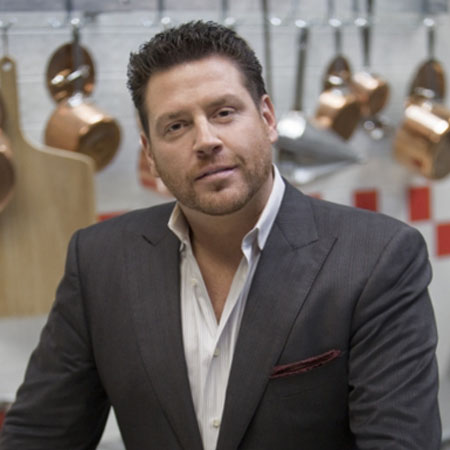 Scott Conant is an American celebrity chef, cookbook author, and restaurateur. He is widely renowned for his three-star New York restaurants L’lmpero and Scarpetta. Similarly, he is also a judge on the Food Network’s show Chopped.

Scott Conant married his long-term girlfriend, Meltem Conant in 2007. They organized their wedding privately with their close friends and family. The duo is blessed with two daughters Ayla and Karya.

Scott Conant was born on 19th February 1971, in Waterbury, Connecticut to an American father and Italian mother.

The handsome and hardworking, Scott began cooking since his early age. While he was eleven, he started taking cooking classes at a community college. Later on, he joined W.F. Kaynor Technical High School and the Culinary Institute of America subsequently, from where he garnered more experienced in cooking.

Conant made his professional career debut after completing his internship at the well known New York City restaurant, San Domenico. He mastered the art of pastry at the Hotel Bayerischer Hof.  After completing education, Conant returned to the United States and started working as sous chef.

During Scott’s cooking journey, he worked for several other restaurants. In 2002, he opened a restaurant, L’Impero in Tudor City which received the three-star review from the New York Times within weeks. He ran the restaurant for almost five years and opened a new restaurant, Scarpetta in Chelsea.

As L’Impero, Scarpetta also received a positive three-star review from The New York Times as well as New York Magazine.

Since then, Scott has gone on to become one of the most well-known and well-reviewed designers of Italian-style cuisine in the world. Besides cooking, he also made an appearance in the numerous television series including; Top Chef, Chopped, The Today Show, 24 Hour Restuarant Battle, etc.

Currently, Scott is busy running his business and onscreen career. On the other hand, he also gives equal time to his family. The couple is happy with their current life and lets’ hope to see them happy in coming days too.

Aged 46, Scott Conant married his long-term dated girlfriend, Meltem Conant. The couple dated for several months before tying the knot in 2007. They organized their wedding privately with their close friends and family.

The duo is blessed with two daughters Ayla and Karya. The couple has been together for almost 10 years and till date, they seem happy together. Similarly, the couple shares a great relationship as a wife and husband with no divorce rumors.

Having a passion for cooking, Scott had worked for many restaurants before establishing his career as a professional chef. In the beginning, he did intern at the New York City restaurant, San Domenico and later on, joined the Hotel Bayerischer Hof where he mastered the art of pastry.

Scott became one of the American Best New Chefs in 2004 after his signature food was published on the cover of Food & Wine. Correspondingly, he opened an Italian restaurant, Scarpetta which was named one of the Best New Restaurants in American by Esquire magazine in 2008.

Apart from his career, he is also active on social networking sites like Instagram and Twitter. His social accounts are mostly filled with food photos. Allocating information from several sources as of 2018, it is estimated that Scott Conant’s current net worth is around $5 million.