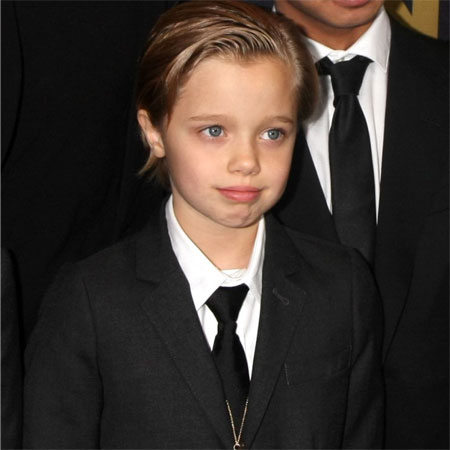 Shiloh Jolie-Pitt is an American teen actress. She is well known as a daughter of on-screen veterans, Brad Pitt and Angelina Jolie. As an actress, Shiloh Jolie-Pitt has appeared in the film The Curious Case of Benjamin Button.

Shiloh Jolie-Pitt is teen sensational rising star. Despite her young age, she has attracted a lot of people’s attention. Moreover, her parents sold the first pictures of her $4.1 million to People magazine. Then, UK magazine Hello! purchased the international rights for $3.5 million. At that time, it was a record in celebrity photojournalism and couple donated all the money to UNICEF.

There was a rumor that Shiloh Jolie-Pitt had asked her parents to be named as male, and wants to be called John. These rumors correlate with the 2010’s Vanity Fair article, which reported that Shiloh wants to be a boy and looks herself as one of the brothers.

Apart from that, her mother, Angelina explained the influence behind Shiloh’s first name. Shiloh Baptist was the name of Angie’s parents and wanted to give their first child. But, due to miscarriage, it wasn’t to be mean. However, Angelina loved the name and decided to choose the name Shiloh for their daughter. Shiloh’s middle name, Nouvel, is considered to be in honor of designer Jean Nouvel, a favorite of Brad’s.

Shiloh Nouvel Jolie-Pitt was born on May 27, 2006, in Swakopmund, Namibia. She is the first biological child of Brad Pitt and Angelina Jolie. Shiloh is Brad’s first child, and at the time she was Angelina’s third child.

With her siblings: Stuff.co.nz

Shiloh Jolie-Pitt studied at the French school, Lycée Français but now she is homeschooled.

The Forbes.com listed her of Hottest Hollywood Tots and has covered People Magazine with her siblings. Shiloh Jolie-Pitt even has a foundation named Shiloh Jolie-Pitt Foundation. The organization was created by her parents to benefit the Naankuse Wildlife Sanctuary.

Shiloh Jolie-Pitt made her acting debut in the 2008 film The Curious Case of Benjamin Button. In which played in the role of Benjamin (Brad) and Daisy’s (Cate Blanchett) baby daughter. Moreover, Shiloh attended the 2016 Kung Fu Panda 3 premiere with her mother.

During Kids’ Choice Awards with her mother and siblings:zimbio.com Shiloh has become a Hollywood child icon for her fashion sense and young talents. Shiloh Jolie-Pitt always travels all over the globe with her family. On September 19, 2016, her mother Angelina filed for divorce and asked for full physical custody of all six children.